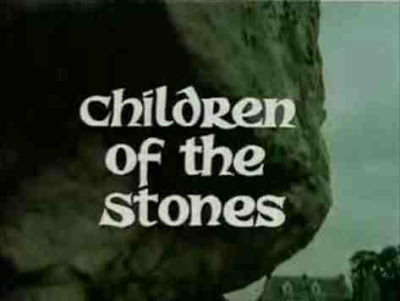 The folk horror genre of filmmaking could not be called prolific, but the few movies within it – mostly made during the early-to-mid 1970s – contain some of art’s most timelessly terrifying evocations of rural Britain. It’s perhaps surprising, then, that two of folk horror’s most revered creations, 1969’s The Owl Service, and 1976’s Children Of The Stones, were actually programmes made for children: TV shows that, while not featuring the torture or human sacrifice of folk horror classics such as The Wicker Man and Witchfinder General, create a threatening, quasi-Pagan atmosphere that could keep a person glancing over their shoulder on bucolic walks home from school – or even the office – for many months afterwards.

Differing from The Owl Service in the fact that the viewer actually has a fair idea what’s going most of the time and that its child stars are all clearly under the age of 27, Children Of The Stones, which has just received a long-awaited release on DVD, takes place in the fictional village of Milbury – better known in real life to druids, Hawkwind fans and dreadlocked people in VW vans as Avebury, in Wiltshire – with its megalithic stone circle. An astrophysicist called Adam (Gareth Thomas, recognisable to 80s sci-fi fans as Roj Blake from Blake’s Seven) and his son Matt arrive here and soon realise that the local children are being turned into a kind of race of Stepford Kids: smiling beatifically like their dentists have just put them under for root canal surgery, and substituting traditional teenage greetings like “Hello!” and “What the fuck are you looking at?” with “Happy day!”. In an arguably even more shocking development, many of them even begin to enjoy Morris Dancing.

The happy disease isn’t limited to kids, and it says a lot about the blissed out creepiness of the village’s adults that one of the most trustworthy of them is a poacher with questionable hygiene and a habit of spying on teens through a telescope. This is Dai, who, after knocking Matt off his bicycle, taunts him with the sentence “Go on! Swear a bit. Call me words!” – a notable contrast to the equivalent overcoat-wearing man in the town where I grew up, who would simply shout “Nobcheese!” at passers by. Cue a plot about how the power of the stones has trapped everyone inside an alternate dimension, the circular nature of time, and Matt and Adam’s attempts to best the local high priest of mindlessness, Hendrick, with the aid of the few others in the village who still have free will. These include Margaret, the foxy – in a slightly damaged single parent 1970s teacher kind of way – curator of the village museum, who provides a potential love interest for fellow single parent Adam (sample chat up line: “I read your paper on megalithic lunar observations. I was very impressed.”). Hendrick, played by Ian Cuthbertson, is a genuinely scary presence and every time his giant bald visage appears, one can’t help but thinking fondly back to that nice, caring chap Lord Summerisle and his reassuring grey tendrils of hair. Also memorably haunting is the series’ theme tune – really more of a theme chant – which I will henceforth be bookending compilations of early 70s acid folk songs with, alongside the theme to Blood On Satan’s Claw.

What Children Of The Stones boasts in atmosphere, it sometimes undermines itself with in drama school hamminess. Peter Demin, as Matt, can sometimes be guilty of an early school of “smell the fart” acting, though makes up for it slightly by having extremely good hair. Presumably freeze frame wasn’t available in 1976, when the programme was made for ITV via HTV, as when an ad break is coming, whoever’s in shot holds still for a few seconds, and – not always completely successfully – tries not to blink or laugh. It’s quite disconcerting at first, leading the viewer to wonder if it’s part of the plot and Hendrik has cast some sort of spell on someone just out of shot. There’s also an inordinate amount of non-sequiturs about chocolate cake, but all this goes hand in hand with another kind of shoddiness: a paperiness of backdrop and primitive way of filming that adds to Milbury’s terror. In the end, it’s perhaps the limited technology available to Children Of The Stones that make it so much more ominous and atmospheric than, say, modern Dr Who could ever be, just as it is the low budget nature of the original 1968 BBC version of Whistle And I’ll Come To You that make it so much better than the 2010 remake. To be a part of a generation limited to three channels of TV, who’d probably never watched a horror film, and to come home from school to this must have been to be otherwordly in a way that even people like me, born a decade too late to enjoy it, would find hard to conceive, and a kind of one-off, out-of-the blue transportation into mystic horror that would probably be unthinkable to a generation raised on Xboxes, Twilight and Harry Potter overkill. In an era when kids ran more freely in the countryside, its folk horror aesthetic – the chance that evil could be lurking all around every time you took your bike out, walked past those weird megalithic monuments, or went out and sat near that old, gnarly tree – must have made it all the more powerful.

5 thoughts on “Children Of The Stones”