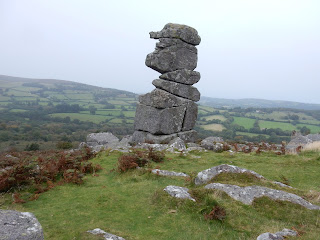 Lots of jobs to do today, a lost phone to replace and three inboxes full of unanswered correspondence, so I decided to do what I often do in these situations: sod it all off, get in the car, head up to Dartmoor and climb a stack of weathered granite. I’ve somehow not managed to visit The Bowerman’s Nose in my dozens of walks on the moor over the last couple of years, which is a severe oversight, as the legend associated with it involves witches and hares, which are two of my very favourite things. The myth connected with it is this: an ancient hunter called Bowerman was chasing a hare. On his way, he stumbled across a witches’ coven and knocked over their cauldron. In retaliation – and because Bowerman was known to the witches as a more general kind of dickhead – they turned him into a stone pile. His hunting hounds, meanwhile, can be found on Hound Tor, in more higgledy-piggledy granite form, across the valley to the south west. When my friend Jay and I reach its peak, we’re pleased to find a hound there, but it’s not particularly fearsome. Even less so is the one other dog we meet on our walk, an elderly springer spaniel who charges out of a drive on our way back to Manaton making a noise it clearly believes to be redolent of hellfire then admits, in a very open and honest way, that its bark is just a front and that it’s actually very lonely and just wants to remember what it’s like to be loved, like back in 1967, when it was born. I half want to retrace our steps a mile just so I can buy it a sausage from possibly the most finely named burger van in Britain: The Hound Of The Basket Meals. 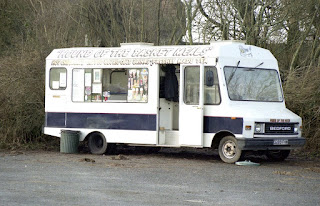 The approach to the Nose from Manaton is all last ditch blackberries living it up on their bittersweet fourth marriages, magic mushrooms, mossy clitter and that unique dark green sunlight you get in the high west in autumn, but by the time we’re up on the top the cloud has come down to meet us. Bowerman looks fairly cheery, even in the drizzle: a jaunty, jowly, cap-wearing train driver from a 1930s cartoon. Forty feet high, he has echoes of the heads on Easter Island, but science tells us his formation is an accidental act of geology. I don’t want to believe that, just as I don’t want to believe the spiritual descendants of that original coven of witches might not still come here, cast a few spells, and perhaps make a really good acid folk album while they’re at it. The rain follows us down the hill, gathering pace, and we’re briefly in Cumbria: highland cattle mill about and everything is soggy, bare and bleak. But this rain is just mouthwash for Dartmoor’s teeth. The sun that follows three quarters of an hour later when we’re on top of Hound Tor is amazingly fresh and sharp, bringing out smoky bracken smells, the glint of hut circles and the rusting hillside below us. Equinox is here and we’re heading into arguably the moor’s most magical season. Soon, the devil will have put his paw print on those blackberries, but he can be forgiven; he does much of his best work here in autumn. 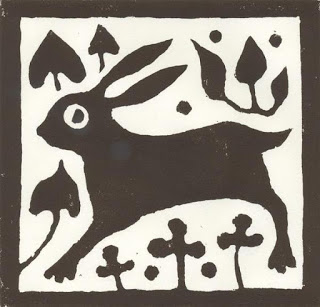 Hare print by my mum. See more of her work here.
Read my new book.