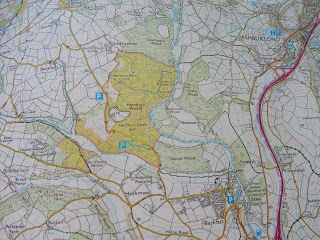 Chainsaws seemingly everywhere in the countryside surrounding my house this morning. Unfortunately they were switched on, too, so I took my notebook to Hembury Woods in an attempt to get some writing done. For this journey I was accompanied by The Blackberry, a dog belonging to my friend Susie, who, before it was pointed out to her that he resembled a blackberry, used to be named Billy. Our journey aptly took us through prime black dog country: above us on the hill the looming ruin of Buckfastleigh Church, containing the tomb of Squire Cabell, inspiration for the dark goings on in The Hound Of The Baskervilles, his grave held down by a large slab of concrete and a strange, squat building, like some hideous cross between a small town toilet block and the lopped off top of a cheap pagoda. This, it is said, was erected so Cabell, who sold his soul to the devil three centuries before heavy metal made it cool, wouldn’t escape and go hunting with his pack of demon dogs. Beneath here are caves that stretch for almost three miles containing eery stalagmite-stalactite combinations that resemble human figures.

Not much more than a mile away, Hembury Woods seems so benign by comparison, and is a good match for my softer hound, who looks like he’s made of wool and moves like he’s made of elastic. He pings and twangs ahead of me up what – with the exception of a brutalist feature – is perhaps the forest’s one harsh feature: a steep, winding cheststabber of a path leading to the site of an Iron Age hill fort, past myriad stag beetles, for whom wedding season is clearly nigh. Looking up into the green canopy, it is possible to believe that there is more oxygen here than virtually anywhere in England. 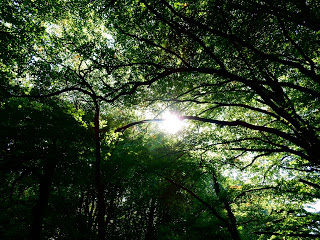 On a bright burnt ochre day like today, you can see almost as far as the coast from this hilltop in one direction and almost to the high moor in the other, but it’s the rushing stretch of river a few hundred feet below that’s the jewelled blue lining on Hembury’s green crown. I’ve never seen the Dart looking better than it does illuminated here by autumn forest light, with a haze of chainsaw smoke above it. “Has everyone except me got a chainsaw today?” I wonder. I begin to feel a bit naked without one: not completely naked, just as if I’ve left the house in only my pyjama bottoms. 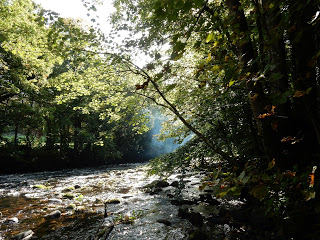 The other chainsaws are still going when I return home so I find a quiet, deserted meadow to write in two or three miles south of the moor. In this same meadow the other day, I witnessed four picnickers inexplicably rubbing their backs against one another with a great tenderness. After an hour, I fall asleep. I’m out for under ten minutes but when I wake up a dozen or so strangers are all around me, walking very slowly and silently in circles. I feel like I’ve been caught in the middle of a zombie meditation apocalypse. None of this group of George A Romero Buddhists acknowledge me with a glance, nor even seem to realise I’m there: it’s as if I’m just another hairy boulder, dislodged from a nearby tor back in the last Ice Age. If this had happened back in Nottinghamshire, where I grew up, I’d be straight on the phone to a mate. “Fucking hell,” I’d say. “You’ll never believe what I just saw!” But if I did the same to my friends who live around here, I imagine they’d react very casually. To them, it would probably sound like nothing particularly bizarre: just another ordinary, mellow, mindful day on the South West Peninsula. 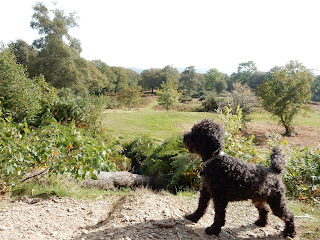