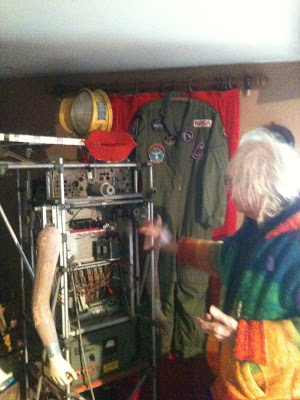 “This is Rosa Bosom,” says Bruce Lacey, showing me into the living room of his chilly, cluttered Norfolk farmhouse, and pointing towards a seven foot robot with a tailor’s dummy arms, a chest full of wires and large red lips. “Her name stands for Radio Operated Simulated Actress Battery Operated Standby or Mains. I built her in 1965 and she’s inspired by the Harrier Jump Jet. She was Best Man at my second wedding. She gave me the ring, blew confetti and played the bridal march.” 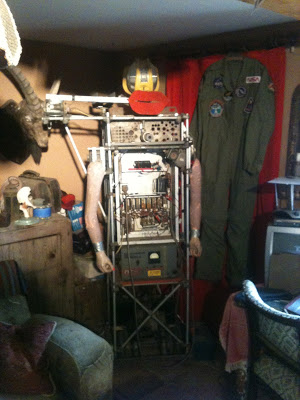 Visiting Lacey is like visiting the lair of a lost Doctor Who who never quite made it into space. Rosa is one of three robots who currently reside with him, surrounded by old costumes, large amounts of taxidermy (“A lament,” says Lacey, a vegetarian) and ventriloquist’s dummies. The other two are Clockface, who is made from a Victorian vacuum cleaner and a grandfather clock, and Electric Man Mark II, a hermaphrodite humanoid who wears a corset and formerly served as the target in the knife-throwing section of Bruce’s cabaret show.
Is Lacey an inventor? Sort of. A performance artist? Yes and no. A film-maker? Of sorts. “For years, the media saw me as a joke,” he says. “The art world saw me as a performer playing at being an artist, the theatre world saw me as an amateur. I see myself as beachcombing, not through the art world, but through all of life, making connections.” The oft-abused word “Zeliglike” really does apply to Lacey, who has lived numerous contrasting lives in his eighty five years on the planet. His late 1950s musical comedy troupe The Alberts were the primary inspiration for the Bonzo Dog Band, and were briefly managed by Lenny Bruce. In the 60s, he played George Harrison’s gardener in Help!, made props for Spike Milligan and Peter Sellers (“a very insecure man”), and played practical jokes with John Lennon whilst filming Not Only But Also. “Do you play that?” I ask, pointing to a Turkish saz, hanging on the wall of his study. “Yes, but it’s broken,” he replies. “Dick (Help! director) Lester chased me with it at a party and hit me on the head with it.” 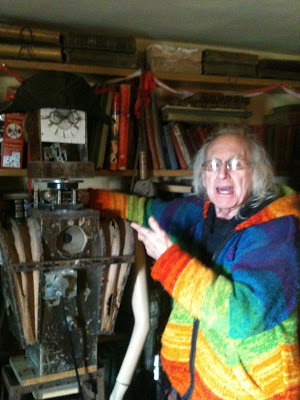 In 1969, Fairport Convention wrote a song about him called Mr Lacey. “It’s true no one here understands now,” they sing. “But maybe someday they’ll catch up to you.” Lacey argues – showing me a banned Union Jack poster for one of his shows, predating the Sex Pistols’ God Save The Queen artwork by over a decade – that he’s not ahead of his time, it’s just that he’s “of his time” and “people lag behind”. “In the sixties, I was already worried about the things we’re worried about now: spare part surgery, food shortage, overpopulation.” 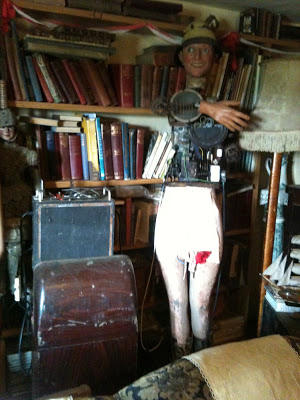 His career has been a restless one, full of dramatic metamorphosis. “There’s a long gestation period to the metamorphosis, but each time I’m like a caterpillar turning into a butterfly.” Having sketched “operations and body parts” whilst in hospital with TB in the 1950s, then swapped drawing and painting for cabaret and robot-making in the sixties, he had an epiphanic moment during 1967 whilst driving along the M4 and seeing Silbury Hill. Fascinated by the way humans had lost touch with nature, he began travelling to East Anglia from London and performing earth rituals at the many hippie fairs in the area, eventually taking up permanent Norfolk residence in 1979, in a move that, because of his vast quantity of possessions, necessitated twenty five journeys in an old three ton truck.

During the drought of 1976, at Barsham Faire in Suffolk, Lacey simulated rain with ashes and cotton wool balls filled with water. A thunderstorm ensued. “Christians thought I was performing magic,” he says. “I knew I hadn’t but it excited me that I had got into a relationship with the elements.” A still more dramatic ritual occurred in 1982 when, heartbroken amidst his break-up with his second wife, he painted a 70 foot woman on the ground at a fair in Rougham, Norfolk, and symbolically made love to her using a corn dolly as a phallic symbolic. “Eight of my nine children were there, and my wife’s lover was dancing and drumming for me,” he remembers. “Art is psychotherapy for me.” 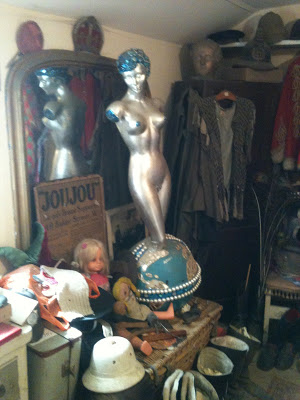 Recently Lacey’s time has been mostly taken up by a musical project which he describes as “like a live, one-man version of Phil Spector’s Wall Of Sound” and the organising of his vast archives, which go back to a wartime childhood spent building planes in his bedroom. These are currently being displayed at a new exhibition at Camden Arts Centre. They’re accompanied by a DVD, The Lacey Rituals, collecting more than six decades of his work. The collection gets its name from an unedited film Lacey made in 1973, showing the everyday life of his family, which he calls his attempt to “leave something behind for the Martians, showing the way humans really lived”. Perhaps not his best work, it nonetheless tells you a lot about Lacey’s philosophy, which is perhaps less that of the hoarder than  the preserver: someone who’s always known that, while you can’t take it with you, it’s your duty to the future to keep it intact. 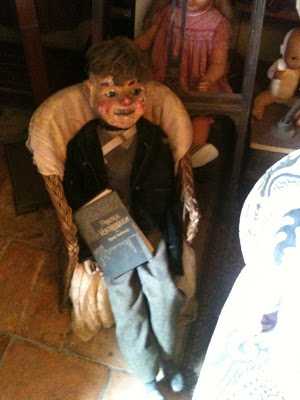 2 thoughts on “The Pagan Robotic World Of Bruce Lacey”