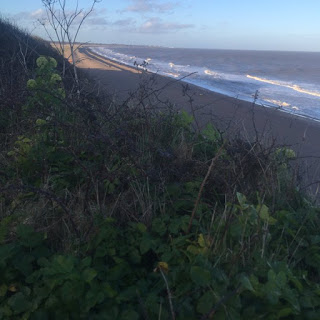 It’s cold and wet when I arrive at Dunwich: miscellaneous fragments of tree and bin and fence are flying through the air and everyone who is or has been outside – which is essentially me, a bold crow and about three other people – looks like they’ve just had their eyeballs professionally washed and dried. I didn’t plan to come here in the middle of the most destructive storm of the year, but, for fitting historical ambience, I could not have chosen a better day. Is there another part of the English coastline that has been more altered by strong weather over the last thousand years than the four mile stretch here from Walberswick, a couple of miles north of here, to Sizewell, a couple of miles south? It’s highly doubtful. In the early 1300s Dunwich was one of the major ports of East Anglia but over the next six centuries the sea staged a series of devastating attacks on it, bringing the coastline over a mile further inland, and destroying all of the town’s original eight churches. The last one finally crumbled down the weakened cakelike cliffs in the 1920s, its final standing buttress summarily being removed and placed safely in the yard of the current, relatively modern (1832) church on the furthest side of town from the waves.
Historians have got a little overexcited about these churches over the years, at times bringing their number up to over 50. In a similar tradition now I’m tempted to add a mosque and a couple of synagogues to the picture of old Dunwich, but I won’t, even though it’s unlikely that one of the current residents of what’s left of the place would call me out on it, since only about 100 people live here now. The legend is that if you listen closely at the right time, you can still hear the ghostly bells of the churches – eight seems to be the number generally agreed on, but there could well have been a few more – ringing from under the sea. This is a story immortalised in the eerie and lo-fi Bells Of Dunwich by the acid folk band Stone Angel, a song that itself seems to have been rendered part-haunted, part-drowned, by the ravages of time.
Even if the bells are ringing right now, I doubt I’d be able to hear them above Poseidon’s violent whistling breath. Seemingly everywhere else in the UK, people are complaining that warnings of today’s storm have been an exaggeration. Not here. A tree is down, blocking the main route to the beach, although because of the angle at which the trunk has fallen and the ivy overwhelming its limbs my initial impression is that a lane I’ve travelled dozens of times has vanished into thin air. This is not the part of Dunwich most associated with the supernatural but it’s a junction I’ve often thought of as singularly enigmatic and eerie: perhaps the nearest to an archetypal blues musician’s devil’s crossroads as you’ll get on the Heritage Coast. Arriving at it on foot one early winter evening in 2011 I came face to face with a huge stag, the two of us staring each other out for what felt like an eternity. During this thirty seconds or so, I felt like I’d crossed some sort of metaphysical divide. In another incident flavoured with arguably no less paranormal excitement two years prior to that, I happened upon an unmanned table of jam in some woodland on the other side of the road.
For a decade, this was the nearest stretch of coastline to my home: a place I visited regularly to read, to swim, to think, which got a few feet closer to me every year. Its neighbours – Southwold, Thorpeness, Aldeburgh – are neater, more London-flavoured places but Dunwich remains desolate and ragged, especially on a gale-wrecked March day. A wooden gate swings furiously in the wind as I arrive on the beach, revealing a rusted generator, and, as I climb the sea wall, I’m lifted slightly and almost knocked onto my back on the shifting shingle. These are itinerant stones, moving constantly southwards and a few centuries ago many of them might have cited Norfolk as their home county. Half an hour’s walk further up the coast a dead porpoise provides another reminder of the sea’s ever-encroaching bullyboy wishes. It’s pushed up against the last bit of shingle, beyond which is only sandy heathland and heathery marsh. It’s the second porpoise I’ve found on this stretch of lonely coast, to add to the pristine one I found with my friend Al in 2011. I called the coastguard about that one and would like to think its body was put to good use: an example of perfect porpoiseness to be shown off for generations in a museum. This one is smaller, and birds – herring gulls and the terns from the light green, sandy sectioned-off nesting area behind me – have already begun to feast on its face. 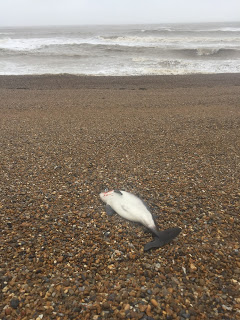 I live in the South West now, a place of inarguably dramatic seascapes: proper proud immoveable unflappable granite faces, not like the unassertive mounds here, which were small when I first sunbathed against them, in 1996, and are noticeably smaller now. With this in mind it would be easy to write such a flat landscape off as minor and unintimidating, but it’s anything but. When Michael Horden runs up the beach away from the ghost in his nightmare in the 1968 BBC adaptation of the MR James story Oh Whistle And I’ll Come To You, M’Lad, anybody who’s walked these beaches in poor light will no doubt feel an extra tingle of dread. I can be out on one of the most isolated stretches of the South West Coast Path in the worst weather and grainiest winter light and not feel any impulse to look nervously behind me. Here, the impulse is there, constantly. It is a different kind of aloneness that you feel at Dunwich, tinged with the sense that, while you have no places to hide, whatever might follow you has plenty of very subtle ones. This might seem a defenceless place but it’s not; it’s just that its defences are ghostly and nuanced. No surprise that James, whose literary defences are also ghostly and nuanced, found inspiration in it.
I know that the general thinking is that the fictional place where Whistle is set is based on a stretch of land an hour or so south of here, as the golf course in the story is clearly inspired by Felixstowe, but it’s Dunwich I always think of when I read and see it: that crumbling cliff beyond the ruined 13th Century Franciscan priory when I see Horden finding the dreaded dog whistle in the weeds and sand above the sea. I could have stayed with friends an hour or so north, as I am doing the following night, but in an unashamed Jamesian tribute I’ve booked into a B&B up the road, alone, which even has the somewhat Jamesian name of The Crown (another item which one of James’s protagonists finds buried near the eastern seashore). “Brian is finding it difficult under the table with his legs,” says a talkative woman at breakfast, who, like apparently everyone else in the room apart from me, has a strong Brummie accent. It is a ridiculous thing to do, coming 360 miles to stay in this place, amidst holidaying strangers, and the ridiculousness is freeing. I could have gone properly Old Dunwich and tried to use herring as currency to secure my room for the night but perhaps that would have been taking it a bit far. The previous evening I crossed the road and visited a bookshop in a chapel where a friendly man in apparent nightwear sold me five books and loaned me three more and his impossibly polite adolescent assistant offered me a cup of tea. When I return the next day the shop is deserted but there’s a stick and a dented sunflower oil can, next to a sign which reads “Bash can with stick to get attention” which comes across as much as a recommended life philosophy as a retail-themed instruction. I set off towards the sea, reassured at the eccentricity of this place, which feels as protected as its adjacent RSPB reserve, and made a vow that Apparent Nightwear will be the name of one of my future rock bands. 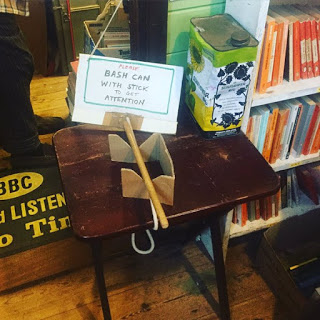 I viewed a house across the heath from here in 2003 that I couldn’t afford, motivated by the regular optimistic thought of my late 20s and 30s that I would imminently become a person who wasn’t constantly scrabbling around for next month’s mortgage. The middle-aged man who showed me the house, which seemed to have last been updated in the less auspicious part of 1974, had not lived in it; it had belonged to his late father. He confessed that, while it was peaceful for much of the year, the “kiss-me-quick crowd” going past on the nearby road in the direction of the beach could be a problem in summer. It struck me as a strange observation then and does so even more now. There are few less intrinsically “kiss-me-quick” places in England than Dunwich. “Drag-a-cold-icy-finger-down-my-spine-slow” maybe. “Kiss-me-quick”? No. And that way it has stayed, with its excellent museum and seasonal 1950s fish and chip hut its only concessions to tourism: a lack of development potential being, along with a strong supernatural ambience, one of rampant coastal erosion’s undervalued plus points.
This can function as a place of levity and high jinx, though. On a sunny but not especially roasting May morning here in 2010 after a night of fairly heavy drinking I ran dramatically from my car into the brown frothy North Sea and swam, as my friends Bridget, Louise, Katia and James looked on, befuddled at why anyone would subject themself to such icy pain, not realising I had found an instant version of the thing they’d been most looking for for the previous two hours: a hangover cure. Later, we buried Bridget under pebbles on the beach so that only her face was showing, but such a traditional seaside activity seemed newly macabre here, a matter of yards away from where actual bodies had been submerged beneath dark water and turbid stone.
The murky water of Dunwich conceals so much: not just porpoises but old merchant houses and graves and churches and even, perhaps most astonishingly of all, an ancient aqueduct. I suppose, in a way, it is still an aqueduct of sorts now, wherever it is. One of Dunwich’s most calamitous storms, in 1740, not only destroyed more of the cliff but, to the villagers’ horror, uncovered bones and buildings lost to the sea centuries before. It was harder to imagine this on that balmy day in May, but today, with the storm raging, and the beach full of fresh driftwood and flotsam, it’s possible to look at the horizon and picture Dunwich’s old frontier, more than a mile out there, in the waves: a place that, had Poseidon been feeling more benevolent toward it over the last Millennium, might have gone on to outshine Norwich as East Anglia’s finest city. Staring at the sea is always a great cathartic reminder of human insignificance but there’s an extra cathartic element on this stretch of coast that perhaps gives it its unique power: it’s a reminder not just of our insignificance but of the way the things around us with a strong illusion of permanence can crumble, a reminder of change and the lack of choice we have in life to do anything but embrace it. 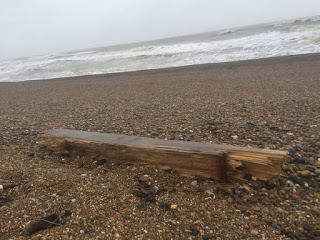 Read my latest book, or the one before it.

Take out a voluntary subscription to this site.

12 thoughts on “The Real Atlantis: A Walk To Britain’s Lost City”