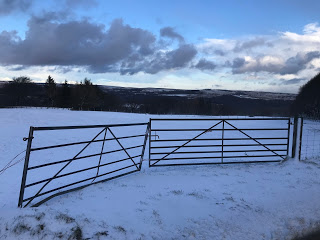 We’re standing in Graham’s front garden when he points out what the really mysterious thing is about snowdrops. The fog has lifted, but only slightly, and it feels like this brief fog raising of an hour or so is a harsh Peak District winter’s equivalent of what might count in many other places as proper daytime, and the snowdrops are scattered all around us, lighting up the world more than anything currently in the sky. “They’re amazing things,” says Graham. “They’ll thrive under snow and ice but if it’s warm and dry, they won’t grow. You can’t tell me that can be explained. That’s not just nature. There’s something more going on there.” As Graham says this, he sweeps with his brush at non-existent debris on his front path and a hen – the only one on his farm – pecks around him, and maybe it’s partly because of the way Graham looks, and the foggy mystery of the afternoon, and everything else that I’ve seen in the last eight miles, but my belief in what he says is unequivocal.
I ask him what his hen is called.
“Hen,” he says. 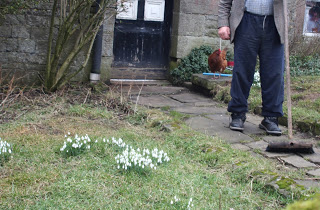 I came here, to the Manifold Valley, just over the Derbyshire border into Staffordshire, for a day of walking, searching for a little lightness, something more gentle than what I’ve been experiencing close to my house for the last few weeks, but it hadn’t quite gone as planned. The previous night I’d walked outside my front door to try to find my kitten, who was being driven repeatedly out of the house by my other female cat, and I’d felt a natural hostility to the air unlike anything I’d ever felt near any house I’d ever made my bed in. My heart turned briefly arrhythmic as I took it in. An iced terror was in the black wind, like the night had fangs. Beyond the old barns I was peering at through the gloom, hoping that my kitten would skip out from a low wall over there that she sometimes sheltered under, there were hundreds of acres of wild ground: woodland trodden only by local hunters and me, scattered with derelict buildings and walled in by dense tree magic. Beyond it: untold numbers of unmarked graves, filled with plague bones – old bones from a different universe, but bones that in fact did their growing only thirteen or fourteen generations from where we are now. Next to a small lake, the tall scarecrow skeletons of last summer’s giant hogweed stood strong, despite the snow. Snow had not been a feature of the day, making it one of only about eleven days of that kind since I arrived here in early December. A few days earlier, three taxis had refused to take me back home from Sheffield, on the grounds that in the height of winter they don’t risk coming up to the spot where my house is. “It will be nice to have an excellent city like Sheffield so close,” I thought when I first saw the house, on a pleasant autumn day. You’re in the outskirts in twenty five minutes from here, but I’ve never known a place twenty five minutes away to mentally feel as far away as it has over the last few weeks.
One sharp golden day sliced through it all and reminded me that, in other places, in other years, February has actually sometimes felt a little like spring. I walked in the Moss Valley with my friend Jim Ghedi.  who writes songs entrenched in the working life and social history of the area. The first time I met Jim, he was hungover, having been drinking with at least four blacksmiths. Jim is young and tall and never-married, with long dark flowing hair, but when he opens his mouth to sing it is as if his body has been taken over by the spirit of a ninety four year-old three times-divorced miner. He has a voice that somehow manages to be rich peat and molten iron at the same time, and has the restraint and confidence in his own musicianship to only use it sparingly on his new LP, A Hymn For Ancient Land. We walked past St John’s Church in the village of Ridgeway and he noticed that the poster advertising the gig had fallen half-down. I found some Blu-Tack which, having had a long and involved relationship with Blu-Tack, I somewhat arrogantly pledged to revive and use to re-affix the poster to the notice board, but it was no use: the Blu-Tack was clearly well over a year old and could not be resuscitated. We walked down the valley to an abandoned engine room and past a ropeswing Jim had attached to a tree back when he was in his teens. Jim told me a story about the packhorse mule which would bring tools down the valley from Ridgeway to a waterwheel near here, four times a day, all on its own, from Phoenix Works, a five and a half century-old scythe and sickle manufacturer that Jim celebrates in his stirring and unforgettable song of the same name. 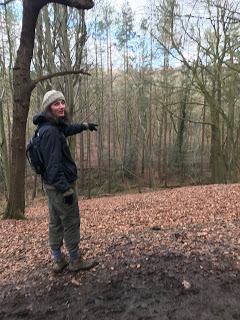 To get here from my house you curve around the bottom of the clock face of Greater Sheffield, from ten to eight to quarter past five. From Bramley, the highest of the villages in the Moss Valley, you can see the much higher ridge where I live, but here is totally different terrain. “Ordinary, working countryside,” as Jim describes it, omitted by most county guidebooks, closer in spirit to – albeit a fair bit prettier than – the bits of north Nottinghamshire where I grew up than to North West Derbyshire. It’s not one hundred percent mandatory that you live in the countryside to make great rurally-flavoured music but I have no doubt that what Jim creates is richer for it. 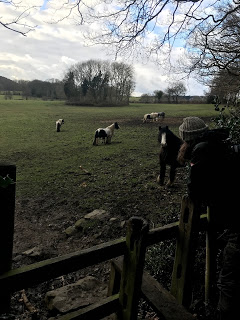 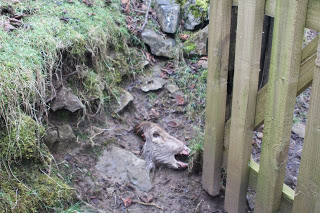 There were moments when I used to think The Peak District looked a little like Devon wearing a different overcoat but I think this less now I live here. Having come directly from Devon, you notice a rhythm to walking in the Peak: that you tend to do it on terrain that’s either a lot more controlled than any walking terrain in Devon, or a lot more wild, and almost never anything in between. Having done an example of the safe, controlled bit down by the rivers Manifold and Hamps, I climbed the valley back in the direction of Grindon, passing kingsized yob crows, and arrived at a farmyard, where I was instructed by my map to take a path running through it to the left. As I did, a man with enormous dark grey sideburns emerged from the farmhouse and barked instructions at me to take a gate on the right hand side of his garden instead. He complained about the National Park “doing me no favours” and directing walkers to the place, which was called Oldfield Farm. He introduced himself as Graham Simpson. He said there had been Simpsons at the house since the 1740s, when two of his ancestors, Jacobites on the run, had first built it. Its original outdoor privy still also remained standing. Graham talked about the winter of 1947, which was so cold that “your coat would stand up when you took it off” and a plane flying over to drop supplies to the snowbound villages in the area crashed. “I remember listening to it go over – you could hear the ice cracking in the trees,” he said. He looked good for 83 and had probably looked truly magnificent for 63, at 63. 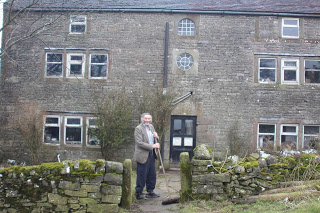 Two things Graham said he didn’t have much time for were Romans and computers. The way he explained this suggested that Romans had come along, got a bit too arrogant, messed stuff up, then everything had been all right for a few years until computers had come along to mess everything up all over again. He told me there’s a code you can type into a computer now and see inside people’s houses, including his. “People are too far away from the real world nowadays,” he said. We talked for around three quarters of an hour and I wondered how many times he had stopped other hikers and marshalled a similar conversation: these hikers who the National Park directed across his land in a bothersome way but who he patently loved to talk to. He said he wasn’t a religious man but believed it was a terrible thing that people didn’t always get christened any more. “It’s like us tagging our cows: you have to do it so you know who they are and where they belong.” I decided not to tell him that I personally was unchristened and silently speculated as to whether this was why I’d had a little trouble deciding where I belonged lately. It was a very different life, this one of Graham’s – staying in one place for so long, just like your dad before you, and his dad, and his dad, and his dad – and not one I wanted but I could see its pluses. He contentedly posed for a photograph and I visited his 18th Century privy, though not to use it for its originally intended purpose as all it has inside it was rubble and peat, then said goodbye to him and his hen. The fog would only be raised for an hour or so longer, and the snow would be back again soon, deeper and more troublesome than before. But underneath it the snowdrops would be thriving.

You can pre-order – and help fund – the special first edition of my new book Help The Witch here. 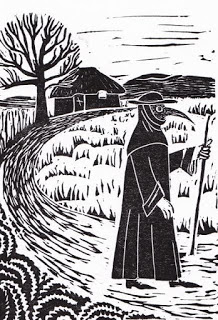 You can read the full story of my time in Eyam in my book Ring The Hill.