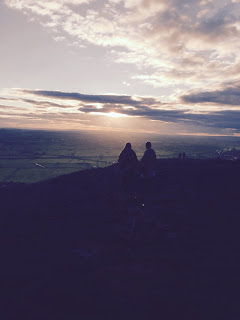 For my first Somerset walk since moving to the West Country I chose the best day of skies all year.  There’s a lot of big talk about the skies in the Fens but in 13 years of living in East Anglia I saw nothing like these. Here, in a tiny compressed early winter afternoon, was not just one kind of great sky, but several, all doing their stuff, sometimes even competing for attention simultaneously. As I hit the M5 at dusk on the journey home, the area to my right above the Bristol Channel looked like an old unwritten letter: blank parchment left in a damp loft to yellow at the edges. Over to the east bright orange cracks in apocalypse cloud suggested glimpses into a magic lava world. Earlier, as I’d approached Burrow Mump I’d mistaken the roiling plumes of cloud behind it for the blurry hills of Sedgemoor. I’ve always made a point of not using the world “roiling” because the overuse of it in novels gets on my tits, but in this case it is apt. What was surreal was the amount of clear sky above the roiling. It created a perfect light in which to climb the Mump and look out far over the Somerset Levels. 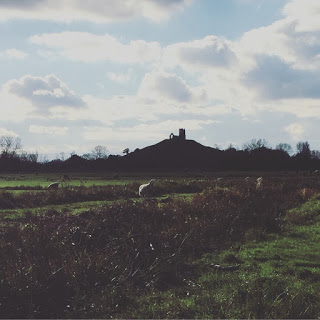 What is Burrow Mump? To be totally honest, I’d never heard of it until yesterday morning. I just happened to read about it and see a photo of it and was compelled to instantly get in the car, drive for an hour and a half, and climb it. How could I not? It’s fucking called Burrow Mump! “Burrow” and “mump” are both ancient words for hill so in other words it’s called “Hill Hill”: a hill so powerful and evocative, they named it twice. It’s also known as Alfred’s Fort, although there’s no evidence of King Alfred’s connection with it or whatever nascent structure was there before the church that stands on top of it. During the Civil War, it provided sanctuary for Charles I’s troops. It is unlikely you could find another sharp mound more apt to climb in the get-up of a 17th Century Witchfinder, which was lucky for me, as I happened to be wearing a nice green cape that my friend Laura found in a charity shop recently. 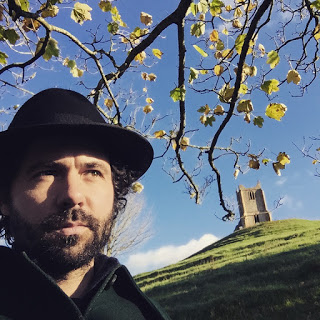 I have always had a penchant for capes. During the spring of 1983 was rarely seen without one, but I do recognise that the rules have changed since then: society views a man in a cape on the verge of middle age differently to the way it views a seven year-old boy in a cape. My attitude to my new cape is this: I enjoy the way it feels and looks but I’m also not especially interested in being known locally as “the guy in the cape”. I would not want the cape to become bigger than me.

I had decided I’d probably only wear my cape for special occasions. But what occasion is more special than climbing a mystical West Country hill on a crisp early winter day? They say it’s impossible to be unhappy in a poncho. Similarly, it’s impossible not to feel ominous in a cape. My witchy hat probably contributed in no small way. As I reached the foot of the Mump I saw a grandma in the back of a passing car spot me in the winking sun and spin around in her seat. I got the feeling it had been a decade or two since she had moved as fast. With the scowling ruin behind me I had never felt more like a ghost. I tipped my hat at her and turned theatrically, with a swish of soft fabric. I imagined her reaching forward to tell the younger relatives sitting in front of her about what she had glimpsed and them humouring her then looking at each other with a conspiratorial nod that meant, “There goes Jill, making up her stories again.”

The cape impeded my walking slightly, as did the marsh mud which rendered my walking boots twice as heavy as normal. I had at least dressed half-practically: business at the bottom, 1960s Hammer film party on top. Shortly afterwards, as the sun dipped, my shadow reached all-time peak folk horror. I just managed to control an urge to rush up to the few people I passed and tell them that I had eaten some Chipsticks and listened to Machine Gun by The Commodores on the way here, just to reassure them of my essential triviality as a person. I would also have perhaps added that I like witches and if I ever did try to find one, it would be only to try to befriend her and potentially learn some spells. Of course, by contrast, when I popped over to Glastonbury a couple of hours later and climbed the Tor, nobody batted an eyelid. Ascending Glastonbury Tor in a cape and a Vincent Price hat is like ascending The Shard in skinny jeans and Converse. There were people here who looked like they were from Mordor. They were still there when I left. Who knows? Maybe they live up there, or arrived from the sky in the east, through that orange gash in the clouds. 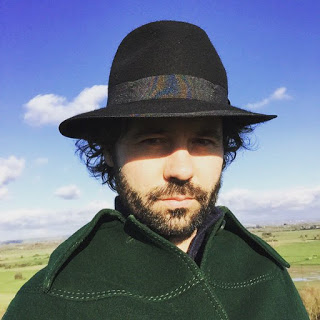 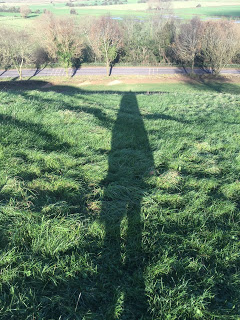 This region is only eighty miles north east of the pillowy, bunched up hill country where I live, but perhaps has more in common with the Norfolk landscape I used to call home. These sudden, sharp isolated knolls – the odd features of a model flatland landscape whose designer had surplus plasticine and got bored – render it a different kind of haunting, though. It’s not surprising that Somerset’s towered mumps were historically associated with a vengeful higher power: as you walk the Levels stretching out from their bases, they seem to follow you around the plains like tall, judgemental grey old men, tracking your every move. My relationship with Crich Tower, which I wrote about here, shows that few rural structures stick in the imagination like a stone one on a hill, and I wondered if the church on Burrow Mump would have a similar lasting effect on the small child I saw being led around it by her parents. Maybe I, too, have contributed to this in my own small way. “Where is the highwayman going?” I heard her ask her dad, as I descended the slope. I didn’t hear his answer and did not turn around to offer my own. I fear it would only have been disappointing: the highwayman was off to get petrol followed by a six inch veggie patty on hearty Italian from the branch of Subway a few miles up the road. 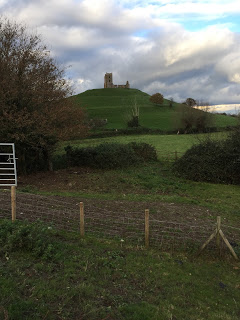 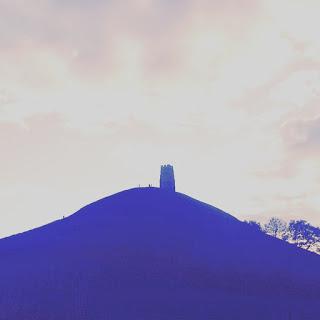