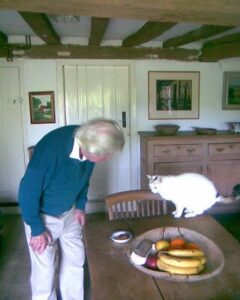 I walked down soft lanes past the cars of my youth, abandoned in orchards and green lanes, to the house of the writer Ronald Blythe and his cat, Kitty. It was a very old house, with bendy walls. Ronald’s coffee was head-meltingly strong and as we drank it and talked about his classic work of Suffolkian oral history, Akenfield, I could see him weighing me up in the gentlest of ways. (Later, in his column for the Church Times, he would describe me as “tall, dark and thin… like a character from the denouement of a DH Lawrence story.”) He didn’t look eighty-seven, which is what he was. He said he had walked almost everywhere his entire life, and lamented the way that people all make themselves “unhealthy and fat” nowadays by buying too much food from the same shops. ‘People had much sharper features back when they worked in the fields,’ he told me. The house belonged to the painter John Nash before Ronald, and being enclosed by its twisty structure felt a bit like being inside a piece of subtly distorted art, or maybe even a tree. The valley where it nestled was in the heart of witchfinder country and Ronald talked about the ‘horribly sexual’ Matthew Hopkins, self-appointed Witchfinder General of the mid-1600s, as if he was, say, someone Ronald’s cousin had gone to school with, and his reign of terror had taken place just a few months ago.