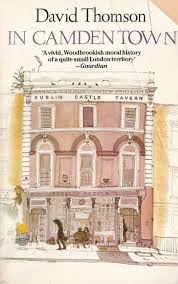 I was in London a couple of weeks ago to do a couple spoken word events around the launch of my new book. I suppose I am guilty, like many people who have spent most of their life living in rural areas a long way from the capital, of not viewing it as a real place, or at least viewing it as a place coated in too much plastic hardness and fear to give rise to any comforting huddles of real community. In a small bit of free time between talks and catching up with friends I wandered around the fringes of Camden and Hampstead, thinking about the London underneath the London I could see, wondering how you teased it out, and marvelling at the confidence with which the houses, for centuries, had been built: grand important buildings for grand important people. I popped into the post office on Haverstock Hill and got told off for queuing from the wrong side, as did Albert, who was after me in line. Albert laughed about this, speaking to me as you might a fellow naughty lad at your school, and told me he was 92. I said he didn’t look 92. He said his secret was an apple a day. He then told me he’d been in Sudan during the war, then worked in the London sewers for six years, before becoming the archivist for Hampstead, and still talked about the place as if it was, say, a village in Worcestershire, I wanted to know his life story, but at this point the woman behind the counter barked at me to get in front of her, at that moment, and get on with my transaction.

I was thinking about this encounter yesterday, as I read the final few pages of In Camden Town by David Thomson, which is most definitely a book about the London beneath the London we see now, or even beneath the Camden I got to know in 1999, when I briefly lived not all that from it. By the early 80s, when the slightly sporadic diary entries in the book were written, Thomson had written novels, memoirs – including the brilliant Woodbrook, which I wrote about on this website last year – and put in a long stint at the BBC as a documentary maker. Beryl Bainbridge pops up early on here but Thomson’s life is not dominated by fellow writers and artists and media professionals; the characters he mixes with are the hardcore drinkers of Camden’s pubs and streets, retired policemen and hostel dwellers. In Camden Town is a book that came out of another, failed book – a social history of the district that Thomson had been working on – and is almost certainly more interesting for the failure. His sympathetic diary entries about the winos and lonely barflies near his house mesh well with his longer passages about the appalling treatment of navvies and the poor during the industrialisation of London: it’s an ostensibly bitty, messy book that coheres because of Thomson’s generally empathetic nature and unhurried eye for detail. But be warned: it is very, very sad. It’s sad because of the often crippingly lonely lives of the people Thomson spends time with (On an alcoholic friend who dies of pneumonia: “He had reached a stage of depression which makes me think of walking on the Caingorm moors in early winter on the heather, before the snow but after the flower has withered into dead paper, when the leaves can no longer be described as brown, grey or green but as a dull mist with no end to it…) and perhaps even more so because of another story that we only get glimpses of, revolving around Thomson himself: his own drinking, his writer’s block, his hearing problems, the impulse that makes him sit behind young women on the bus and put his hands on the metal bar at the back of their seats in the hope of touching their hair. The latter side of Thomson made for uncomfortable reading, but this is not a comfortable book, in any sense. I took a long time to get through it, yet savoured so many historical details, yet also found myself repeatedly asking a big question: “Has reading books like this actually made me a happier person?” I cannot say that it has. But it has perhaps made me a fuller person, a person more aware of the spectrum of human experience, more aware of human suffering, of the nuance and complexity of personality. And I do not regret that. I will definitely read more books like it. But will I read In Camden Town again? That is unlikely. Thomson’s books are so dense with slow detail they repay revisiting but I don’t know if I could put myself through the particular cold edge here again: something funereal and lonely that hangs over the whole 250 pages which has left me with a particular never-before-experienced wintry feeling that might be best summed up in the fact that for comfort and light relief I am now reading a novel about the lives of poverty-stricken Icelandic sheep farmers in the early 1900s.