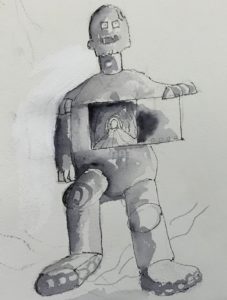 One day I was hiking through a sharp cleft in the woods when I met a robot walking towards me up the sunken green lane. This was a surprise, because I’d been told that this particular part of the woods, where the nearest building was a mile away and the light was gauzy and filled with the duplicitous shadows of newly denuded branches, was a place where you might find piskies or faeries or maybe huge liminal dogs, but at no point had anyone mentioned the possibility of robots.

I say the robot walked towards me, but that is technically incorrect; it was more that he slid, on something between skis and metal feet, He bumped slightly over the exposed roots of beech trees, but took it in his stride, never appeared in danger of falling, until he was a foot from my face, He said nothing from his wide oblong mouth, so I took it on myself to be the one to begin the conversation.

“Where are you from?” I asked.

“The future,” said the robot.

“A very distant part. Hard for you to imagine. Don’t even try.”

“But are you not in danger of changing the course of history, now that you are here? You have already walked at least a hundred yards along this holloway. I know it’s autumn, but there are still beetles and other insects on the ground. You’ve probably killed some of them with your feet. Everyone knows you can do irreperable damage to future events.”

“We have that figured out in the future. We have ways of sorting it. You really don’t need to to worry about that. People and robots have been time travelling for a long time in the part of the future where I come from. We have worked a lot of stuff out. Also, they’re not feet. They’re called rotorsocks.”

A strong gust of wind harassed the tops of the trees, and a few acorns detached from the branches and became a form of boisterous dry rain, almost hitting the robot and me.”

It was a vast question: probably the vastest I had ever faced. “Why not?” I concluded.

I had lost my job the previous month. This being only four months after my aunt, the one human being I’d been genuinely close to, had been crushed to death in a tractor accident on the farm where she had lived and toiled. In all honesty, I was feeling quite gung-ho and nothing to lose about the point life had brought me to, so when the robot slid open a metal plate in his chest cavity and invited me to step inside, I did so with little hesitation. He was a much taller, wider robot than I’d realised, when I’d first seen him bumpsliding up the holloway on his rotorsocks, and I was able to climb inside his rib cage with little trouble, although it did help that I had become very thin of late, particularly since losing my aunt and my job.

There were some clanking, rusty sounds, like gears grinding, sounds far more clanking and rusty than I would have imagined might emerge from a robot devised in the very distant future, as opposed to merely the future. Then I felt a sensation that reminded me of the time I crossed the Channel from Dover to France on a hovercraft, except exaggerated a hundredfold, and more redolent of spinning than forward motion. This lasted what I took for about five minutes, but what you probably couldn’t put a time length on in this limbo state between centuries (or was it whole millenniums?).

After that all was very silent, silent in a blanker, more bottomless way than even the woods when I walked in them at 3am, searching for something I could not name, and while I’d been dimly aware of metal in front of me before, now it was too dark to see anything at all. I reached out to touch the back of the robot’s chest cavity, to give myself some spatial awareness, but I could feel nothing. I am still in this deep, silent blackness, writing this now, except I don’t have a pen, and when I reached out with what I thought was one of my hands to touch my other hand, it wasn’t there. One hand might still be there, but I cannot find another part of my body to use and make sure. There is absolutely no way of telling. I cannot feel anything of myself, in fact, physically, but I am still having these thoughts and recording them for posterity. I do not know where the robot has gone.

This is a story excerpted from my book HELP THE WITCH. I have some copies of the beautiful, soon-to-be-very rare hardback here, which I can sell for cover price plus tracked and signed postage, including a squirrel, hare or owl bookmark by my mum (you get to choose). Please email me via this link for info on how to order.

The robot sketch is by my dad. You can follow his new Instagram page for his art here, and visit his shop here.

My latest non-fiction book is RING THE HILL.

If you’d like to subscribe to this site and support what I’m doing, you can do so via the homepage.