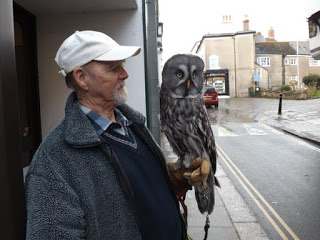 Pete and Lady Jane Grey
I wore my best shoes to my local Owl Club. Who wouldn’t? I’d only been there a matter of seconds, though, and I was already putting them in jeopardy. An owl had done a poo very close to the entrance to Owl Club and I was weaving, last minute, to dodge it, swivelling and swerving in a move arguably more impressive than any I’d pulled last week at my birthday party whilst dancing to Funky Town, the hit 1979 song by Lipps Inc. “I’ll just get that,” said my friend Pete, diving in with some kitchen roll. “Ooh, who’s THIS then?” I asked, gesturing at the great grey owl a few feet away, but Pete’s head was dipped at the time and he assumed I was referring to a tall pensioner in front of me. “This is Alby,” he answered. “He’s our Chairman.” I’m not the kind of person who’d use the phrase “Ooh, who’s THIS then?” to open a conversation with a stranger in his early seventies but it was novel to be briefly mistaken for one. “Hello,” said Alby. “I don’t have my owl with me today because I’m undergoing chemotherapy and cannot afford to get scratched.” Behind him, an African Spotted Eagle Owl baited excitably at a ringtone of the opening riff from The Who’s Baba O’Riley. I’d been at Owl Club all of two minutes and already there was drama everywhere. Soon, rumour had it, there would also be flapjacks.
I first bumped into Pete last autumn when he was in town, walking an owl. In Totnes, near where I live, saying “I bumped into him when he was in town, walking an owl” is a bit like saying “I bumped into him when he was in town, buying some milk” elsewhere. Pete is one of three people regularly seen around Totnes walking one or more owls but it is generally perceived that he is the most original and authentic. One time when I bumped into Pete with Wizard, a European Eagle Owl from the Totnes Rare Breeds farm, on the path near the train station, he managed to persuade Wizard to wave goodbye to me with his wings. Later I accompanied Pete and one of his own owls, Lady Jane Grey, around town on market day. Everywhere we went, people stopped Pete to ask about Lady Jane, who is a great grey owl, or photograph her. “You can come to Owl Club too if you like,” Pete told me. 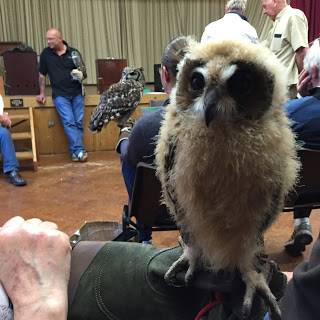 Torbay Owls And Company is actually a splinter owl club from a bigger owl club. “We started our own because there was lots of backbiting at the other one,” I was told by a gently spoken Scottish man called Norman, who, with his wife Jan, owns three owls. Earlier Alby had explained to prospective new members of owl club that they wouldn’t “get any of that ‘my owl’s better than your owl’ stuff here.” These prospective new members included Jamie, who’d brought his European Eagle Owl Boo along to Owl Club. Although only eight weeks old, Boo already weighed sixteen pounds and will grow to twice his or her size. Many owls, I learned, are “very hard to sex” when they’re young, although one man sitting near me said he could do it with a 95% success rate using magnets. Something made me stop short of asking how.
Not everyone at owl club had brought their owls. Some had just come for owl advice. This was given by Alby and included “never approach an owl from behind”, ways to get food (“always have a plastic bag with you in case you see a car hit a pheasant”) and the dangers of being “footed” by an owl. Alby explained he had been on steroids recently, which made him “feel like he could break into Paignton Zoo and feed the lions by hand.” He stopped short of demonstrating, but did bring out some large dead rats out of a cool box to feed to tonight’s owls. Authoritatively, he explained how to tie a falconer’s knot – “my way, the good way, not the way you see on youtube” – and that stroking an owl’s back feathers is bad, as it rubs the natural oil from them. Later, there was chance for everyone to eat flapjacks and admire each other’s owls, all of which lived in spacious aviaries in the Torbay area. After air kissing his African spotted eagle owl Ellie’s beak, Norman explained that being around owls had aided his recovery from a stroke a few years ago. He also told me about his idyllic boyhood, on the edge of Caingorms, where he and his friends would foster orphan crows.
“One boy had a jackdaw who’d follow him to school, then wait on the roof for him until lessons were over,” Norman said. This seemed less far-fetched to me than it might have done before last year, when I briefly befriended a jackdaw who tumbled down into my fireplace. Jackdaws have nested at the top of my chimney for two springs in succession and, along with an unseen creature I call The Guinea Pig Bird, are my most raucous feathered neighbours. On a quiet day, the echo of their chatter can give my living room the ambience of a deserted vampire church, but this particular fledgling had a bumbling, mellow air about him and perched happily on my arm as I showed him the work I’d been doing on the garden recently. When, on the advice of a bird rescue helpline, I placed him high in my hedge, he hopped back across the lawn to me. 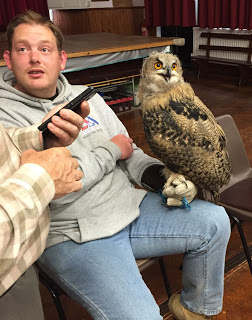 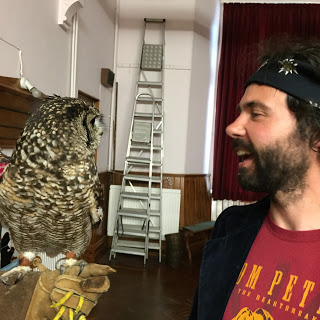 Me and Ellie
The history of birds is weighed down with superstition. If you live in an avian-heavy bit of countryside and read a lot about folklore, as I do, it’s easy to overthink your life. In the 19th Century it was said a jackdaw down the chimney forecasted bad luck or illness, but I’m choosing not to believe that’s why I spent last summer afflicted with a severe urinary tract infection followed by prostatitis. Similarly, I’ve given up saying up saying “Good morning Mr Magpie, and how’s your wife” to magpies recently, as there are endless magpies in my area and very few of them are in steady relationships. If you spot a cuckoo on St Tiburtius’ Day you’re supposed to turn out your pockets and spit. Fortunately, St Tiburtius’ Day was three weeks in the past by the time I heard my first cuckoo of this year, near Fernworthy Forest on Dartmoor a fortnight ago, so, instead of scattering loose change, sputum and receipts all over Sittaford Tor, I just reported it at the cuckoo sighting page on the Devon Birds website. This was during one of those long meteorologically irascible Dartmoor walks you get in spring that leave you feeling like you’ve been trapped in a car wash for four hours. On the plus side, I came out of the walk feeling nicely exfoliated. For the last week I’d had a nasty spot on my nose which no manner of antiseptic had managed to budge, but, returning home, I discovered it had gone. What I’d really needed to apply to it all along was not TCP but a liberal coating of Dartmoor.
On a far more forgiving day last week, I travelled to a gentler area of the moor behind Rippon Tor, with Naomi Barker, an ecologist who works for the National Park Authority, to look for a cuckoo named Whortle. Whortle had been tagged in 2013 as part of the British Trust For Ornithology’s project to find out why cuckoo numbers have diminished in England so drastically. Scotland’s cuckoo population is currently booming but in the last two decades the UK’s total number of cuckoos has dropped by almost two thirds. This is partly because cuckoos in southern England have begun to fly to Africa via Spain, where it’s arid and difficult to survive, instead of Italy, like their Scottish peers. “When I see a tagged bird is flying via Spain, I tend to say ‘Oh dear, you’re fucked’,” Naomi confessed. There is also a line of thinking that says the Spanish shoot more cuckoos than the Italians but this cannot be confirmed. The earlier springs we now experience don’t help, meaning cuckoos don’t return to the UK early enough to plant their eggs in the nests of meadow pippets, reed warblers and dunnocks, as has long been their habit. To lure the cuckoos in to be tagged, the noise of mating cuckoos is played and a paper mache cuckoo diplayed. “Last time we did it just here,” said Naomi, pointing to a hawthorn tree, “four cuckoos appeared within five minutes and one tried to have sex with the paper mache cuckoo.” Such a cuckoo orgy will be no surprise to anyone schooled in 70s folk songs such as Pentangle’s The Cuckoo and Morris On’s Cuckoo’s Nest: tales of village adultery and dark rural sleaze.
Naomi and I didn’t find Whortle, but, as we walked the moor, I expanded my bird knowledge a little further. I felt good about this since I’d been an ornithological dunderhead for too long but it also had its bittersweet aspect, as there’d been a pleasing mystery to my ignorance about birdlife, of perhaps a similar kind to that responsible for much of our bird folklore in centuries past. For a while, I’d mistaken the sound of my local woodpecker for my garden gate. “Ooh, I have post!” I’d often think in the morning, when actually I just had woodpecker. What I’d once referred to as Needy Facebook Status Owls I’d more recently correctly identified as a female tawnies. Returning home from my walk with Naomi I listened to a starling and mourned its former incarnation as Text Message Alert Bird. Elsewhere, I identified a wren, jackdaws and a sparrow. I was feeling a little plaintive and wistful when a determined squeak pierced the evening air: a noise you might usually more readily associate with the industrious ground level destruction of a cucumber. It was a sound that had been a pain at times, especially when sleep was needed, but it had not been heard since last summer, and now seemed, for the first time, truly welcome. “The magic might be fading elsewhere,” I thought. “But at least I still have you, Guinea Pig Bird.” 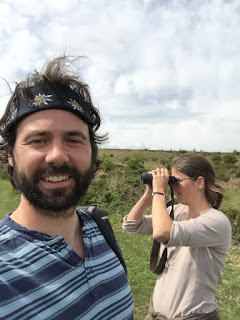 Me and Naomi looking for Whirtle the cuckoo
Another piece I wrote about my local owls.

Read more about Pete and owls in my new book in October.
More rambling from me about cuckoos and owls on my radio show.