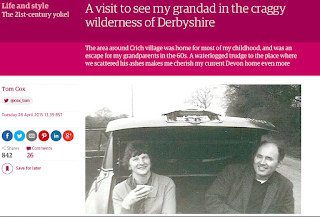 I quit my monthly Guardian column yesterday. I thought I should explain a bit here about why, in case anyone who reads the column regularly is wondering where it’s got to. The column, which was called The 21st Century Yokel, covered nature, country customs, folklore, landscape, family and my small adventures in rural Norfolk and Devon and the North East Midlands, and had been a fixture of the paper’s Life And Style section since spring 2011. It ran online-only because only a fool would hope that something so utterly separate from the zeitgeist or news or celebrity, containing such a dearth of controversy, soul-bearing confession or shit-stirring opinion would run in the print version of a modern newspaper. It was easily the most poorly paid of all the work I do, I received no travel expenses for the research trips I did for it, and I put a huge amount of time and love into it. I accepted all this and enjoyed it a lot, though, because it was a space in a newspaper where I had a fair bit of freedom to write about subjects you don’t tend find in newspapers, in a very non-newspapery sort of way. It also provided a complimentary portal to my last few books: a way of showing people who would typically be apprehensive about reading cat books (people, in other words, like me) that what they would get in my cat books was often not the sort of stuff you normally find in cat books.

My latest book, in case you’d like a look.