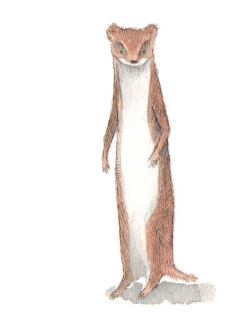 It’s been several years since I’ve been abroad. I could put this down to a couple of very obvious reasons – a certain reluctance to plan that can become ingrained after many years of stubbornly self-employed life, my fear of flying, following lightning striking a plane I was on several years ago – but I’d perhaps be ignoring a more significant one, which is that I don’t really yearn to be away. I’ve got an endless list of wild places in Britain I want to visit, all of which I can happily place ahead of overseas equivalents in the queue, but it’s not even that. I am more and more interested in the part of the outdoors that immediately surrounds me. Obviously, this is partly because I’m lucky enough to live in an extremely beautiful and (still, for the time being) relative unspoilt part of the Deep South West (Devon and Cornwall are the Deep South West in my view – anyone who lumps them in with “The South” doesn’t properly know them), but I was the same in the place where I lived before, on the opposite side of the country, and think I’d bring a similar attitude to any rural location.

This is a feeling that has grown in me over the last decade: a realisation I spent my teens and twenties walking around in a cloud of misguided, suggestible ambition, missing a lot of interesting stuff right under my nose, coupled with the worry that The Internet is making the universe smaller in a not always entirely beneficial way, prompting us to spread our experience more thinly, to be “worldly” in the most distracted and inverted comma of fashions. The two square miles around my house alone loom increasingly huge and colourful in my mind, dotted with fauna and plantlife I could study for years and still not truly know. It’s when I’m in a supposedly bigger world that I often feel stymied, cooped up. As Rob Cowen says in Common Ground, his brilliant book about exploring what he calls “the edgeland” near his house in Yorkshire: “Ours is a world growing yet shrinking, connected yet isolated, all-knowing but without knowledge. It is one of breadth, shallowness, and endless swimming through cyberspace. All is speed and surface. Digging down deeper into an overlooked patch of ground, one that (in a global sense, at least) few people will ever know about and even fewer visit, felt like the antithesis to all this.”

I walked the lings, water meadows and bridleways around my house in Norfolk very extensively from 2008 to 2013, but it’s the noticing part that I’ve got a little better at since moving to Devon early last year. At one point not so long ago, for example, I might not have picked up on the minuscule anguished squeak I heard behind me in some bushes half a mile from my house on Monday: it might have been lost in the small din of a summer day in a wildflower meadow near a river. I’d have charged on, eager for more fresh air, instead of slowing down and listening, as I did, and I’d have missed the amazing and somewhat horrifying sight that occurred just under a minute later: two furry animals, each no bigger than my foot, locked together, spinning onto the path, at least one of them in extreme pain.

One of these animals was a young rabbit and the other was a weasel, but it took me a few moments to realise this. I watched rabbits suffer a few times in the jaws of my cats Ralph and Shipley, before I attached large double bells to Ralph and Shipley’s collars last year, but this was another level of vicious: seeing the burning darkness in its eyes and the shrieking rabbit in its jaws, I momentarily became the rabbit and the weasel became the headlights.

What happened next astonished me further still: a larger rabbit, bouncing out of the undergrowth and hurling itself at the weasel. This, though almost comically ineffectual, was just enough to break up the original ball of weasel and rabbit, and as they separated, all three creatures noticed me for the first time in my static, mesmerised position, not more than four feet away. The grown rabbit hopped into the bushes, its offspring flopped and writhed behind it, clearly badly injured. The weasel scuttled in the other direction, pausing and getting on its hind legs for a second to peer at me in a “Can I take him?” sort of way. I sat and waited and five minutes later the weasel re-emerged, scuttling across the path like a cackling comedy villain in a Hanna Barbera cartoon, confirming everything we know about weasel etymology. I heard nothing more. I wondered about looking for the young rabbit and putting it out of its misery. I knew I wouldn’t.

I’d had a lot on my mind that morning, was probably in a slightly more fragile state than usual, and I felt simultaneously shaken and awed by what I’d seen. Initially I had the thought “I wish I’d filmed that” but I quickly banished it: it was an impulse fostered by the modern condition of going everywhere with a phone, of sharing above experiencing. I already do too much of this, like most people, and I want to cut down on it, if not stop altogether, as it’s ultimately just another way of skimming across the world’s surface. I didn’t actually wish I’d filmed it at all. The Internet just made me briefly think I did. But I felt a little alone with the visceral knowledge of what had happened and needed to offload it. I looked around, but all I could see were some jersey cows. They probably wouldn’t have thought it a particularly big deal if I’d told them. As I walked back home through the trees, I got the sense that the Devon countryside’s June party had reached its crescendo: the nature equivalent of that moment where you stay out, thinking things will get wilder, and they do, but in a slightly dark way you regret. Blood-caked bird wings and gristle lay on the path ahead of me. Towering bullyboy nettles stung my bare legs: thistles that weren’t bold enough to slag me off to my face. I didn’t notice until later. As a forager told me recently, “the stings do you good: you should embrace them” but that wasn’t why: the only thing I was embracing was my dazed and preoccupied state.

What has stayed with me most is the image of that larger rabbit, bouncing so determinedly to its offspring’s defence, despite its non-existent artillery. It was impossibly touching and deeply sad, and another illustration of what I’ve learned about rabbits, living near so many of them for the last year. That they’re nature’s ultimate hippies, wanting nothing more out of life than to live in peace and eat their greens and have lots of unfaithful sex. In the weasel’s eyes I thought I saw pure evil: that look briefly became a metaphor for other lamentations about injustice, greed and selfishness that were whirring in my mind. But naturally this was bollocks. There was no evil here, because this wasn’t about choice. A weasel didn’t choose to kill a rabbit, not like, say, a local council chooses to destroy the habitats of countless weasels and rabbits when they approve a planning application for some wanksome executive housing estate. It is just surviving, playing a part in the churning maelstrom of the countryside where I live: providing a (albeit especially predatory) part of the death that’s an intrinsic part of a great, ever-changing, maelstrom rainbow of life. I am not angry with it. You can’t be angry with a weasel for being a weasel*. But three days on, I’m still feeling a little bit shaken from it, and a little bit more alive as a result.

* Rule does not apply to Michael Gove. 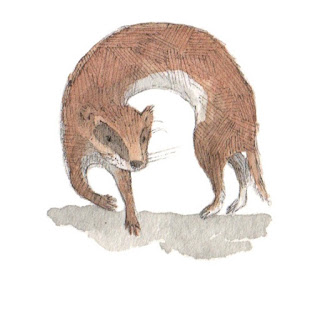 Illustrations by Sophie Gilmore. See more of her artwork here. Email me via my website if you’re interested in getting your artwork featured on this blog.

WEASEL FACT: The collective noun for weasels is “boogle”.

14 thoughts on “A Weasel I Briefly Met”