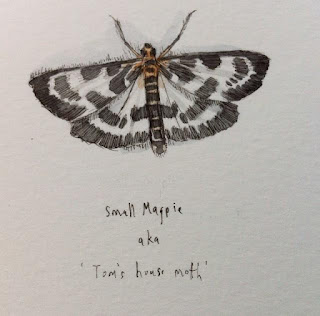 July 18th, 2014
I now appear to be living with five cats. I didn’t intend to live with five cats. I already had four but one had clearly heard on the grapevine that I was a soft touch and was waiting in a bush for me when I moved to my house here in Devon in spring so, after a few weeks of what I kidded myself was resistance, I decided to take pity on him. Maybe having five cats isn’t really a big deal, though. I actually live with far more moths than I do cats. I just don’t mention it very often.

September 10th, 2014
Just told a moth “Good moth!” I praise moths so they distinguish good behaviour such as going out of windows from bad, such as flying at lamps.

June 5th, 2015
I seem to have a record amount of moths in my house this summer. I don’t like to practice favouritism with them, but at the moment I’m especially fond of the Small Magpie Moth in my living room (see below). Popular also are the smaller Mother Of Pearls, one of which I initially mistook for a small leaf, then chased through the house in order to apologise. Possibly due to this, most of these normally hang around near my front door. I said goodbye to one of them earlier, but it could be argued that it was needless, as I was only going out for fifteen minutes. 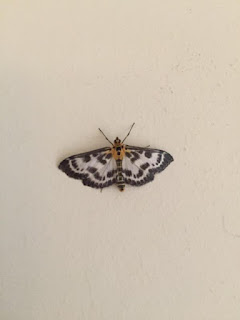 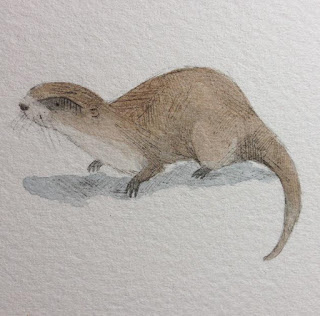 August 4th, 2015
Walk today near Prawle Point, one of my favourite parts of the Devon coastline. As I climbed the steep hill back from a hidden cove, a 100 yard cloud of butterflies dispersed in front of me. This was pretty amazing, but arguably only as amazing as the moths decorating my porch wall every evening. I told my mum about this and she remembered camping in France: how she’d wake up and find the inside of the tent wallpapered with dozens of different moth types, like a small art exhibit. Moths are also great, obedient pets, in that all you need to do to get them to come and be with you is leave the curtains open, several lamps on and play an early Leonard Cohen album.

August 8th, 2015
Party at my house today. It wasn’t my birthday but my friend Miriam brought me an unexpected present: her book, Otter Country. With the book was a small extra parcel, wrapped beautifully in black ribbon. “Don’t eat that,” she advised. “It’s otter poo.” This is probably the strangest gift I have received since 2012, when my friend Annabel got me some owl pellets for my birthday. Several drunk guests later mistook these for truffles and – had I not sharply intervened – the whole episode could well have ended very nastily.

August 17th, 2015
I’ve seen a couple of large, furry, very green caterpillars this year on the footpaths near where I live – both times, pedestrians have kindly stopped for them. Apparently the same thing happened to my friend Jennifer yesterday, although in this case the caterpillar – probably a moth one – was orange. She, her family and three strangers stopped to look at it. “Hold on!” said one stranger, authoritatively. “I’ll use my iPhone to find out what it is.” He took a photo, fed it into the appropriate identification app and, as they waited for Siri’s verdict, a few other pedestrians joined the throng, eagerly. A tension built. Finally, after a couple of anxious minutes, the phone made its announcement. “Orange caterpillar,” it said.

September 9th, 2015
A visit to the otter sanctuary at Buckfast, which I fortunately managed to time to coincide with the otters’ afternoon feeding session. It was well worth the £8.45 entry fee, not just because of the space, and the diverse personalities and types of otter here, but because of the obvious, brimming love and enthusiasm of the staff. Otters here come from all over the world, but some are rescued locally, having washed away from the Dart in floods or been injured by cars. Notable otters I met here include Sammy – who, having recovered from a serious lung problem, is very playful (“too much so to ever return to the wild: he wouldn’t know what to do”) and sometimes sits on the head of his keeper Tim – and Mr Squeaks, who is now too old to swim properly, and sounds more like an otter toy than an actual otter, and also a bit like he has smoked forty Benson And Hedges a day for the last decade. I also learned some new and unexpected things about otters, such as that their top land speed is around eighteen miles per hour, and that they climb trees. 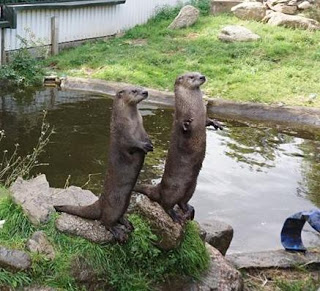 The best part of a visit to my local otter sanctuary is when the otters stand solemnly for their national anthems.

3 thoughts on “Diary Entries About Moths And Otters”