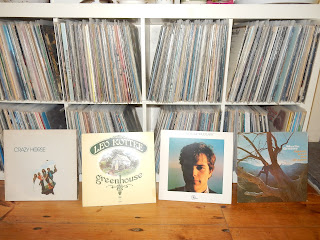 Crazy Horse: At Crooked Lake (1972)
If you’ve heard and enjoyed Crazy Horse’s eponymous first album and bought into the myth that it’s the only great thing they ever did without Neil Young, scrub that from your mind right now with extra strong detergent. This, their third LP, is better. Better than anything they did with Neil Young. Better than the best Poco album. Better than The Eagles being beaten up in a barn by guys with better hair and ripped leather jackets. Somewhere in here is perhaps the most swaggeringly realised idea of Gram Parsons’ vision of “cosmic American music”: particularly cosmic, in the case of We Ride and Vehicle, which feel like Crazy Horse are tapping into something unidentified in the sky above a desert. I’m not sure why At Crooked Lake has been overlooked by history: perhaps because the quality of Crazy Horse’s songwriting dropped off a bit on their second album, Loose; perhaps because people are caught up in the legend of Danny Whitten, who wrote most of the best songs on the first album then died of a valium and alcohol overdose and inspired much of the mood of Young’s subsequent doom trilogy; perhaps just because there was too much damn great music about in 1972 and some of it got lost. All the best songs on At Crooked Lake are by two brand new members of the band: Rick and Michael Curtis, who also wrote Blue Letter for Stevie Nicks and Lindsey Buckingham and what became Crosby Stills & Nash’s early 80s smash Southern Cross. Rick’s Don’t Keep Me Burning is my most played track of this year, sounds like Paul Rodgers read some good books, moved out west and bought a ranch, and smacks of a very real kind of heartbreak. In the fact, there’s a very raw “just had my heart stomped on” vibe that comes through from all of the songs by the Curtises, which reminds me of another great country rock album, North Hills by Dawes. Except, unlike that record, it’s two apparently freshly heartbroken songwriters, not just one, and that makes At Crooked Lake twice as good.

Marlin Greene: Tiptoe Past The Dragon (1972)
I picked up Tiptoe Past The Dragon using one of my rules for buying albums from the early seventies, which states that if you see an album from the early seventies featuring a person in a tree on its cover, you should always buy it. A dragon reference always helps, too, although, looking at the cover of his lone solo LP, Marlin looks less like he’s about to tiptoe past the dragon and more like he’s about to thrust aggressively in the dragon’s face. A former Muscle Shoals studio engineer with a soul background, he sometimes comes across here like a more lower key version of manly country funk deep throats such as Tony Joe White and Thomas Jefferson Kaye, and is sometimes something lighter and more girly altogether, maybe because he’s pretending. My favourite track is Who’s The Captain Of Your Ship Of Dreams, which is all drunken star staring in a stranger’s garden and woozy dark hammond-led late “hold on – psychedelia’s not over yet!” psychedelia. It also poses question I’ve been asking myself a lot recently. I used to think the captain of my ship of dreams was Sharon, my old boss at Tesco in Ilkeston, but it probably isn’t any more. Perhaps I don’t have one any more, and perhaps that’s an issue I need to address.

Leo Kottke: Mudlark (1971) and Greenhouse (1972)
I think I’d written Leo Kottke off as one of those musician’s musicians who’s so much a musician’s musician that non-musicians aren’t actually allowed to listen to him. I was very wrong about this. I was drawn initially to Greenhouse because I like greenhouses and it’s called Greenhouse and has a greenhouse on the cover, but also because Kottke gives a pithy, intelligent description of all of the songs on it on the back cover, except for a song called Owls, as if the fact that a song is called Owls tells you all you need to know on its own, which of course it does. Tiny Island is a song so perfectly sad, it could only have been written by a man with a terrific sense of humour. Like Hear The Wind Howl, from the previous year’s equally stupendous Mudlark, it makes an argument for Kottke being only matched by Harvey Mandel in the category of ‘Largely Instrumental Solo Amazing Guitar Players Guys Who Should Have Sung More Because They Were Bloomin’ Great At It’. The sleeve notes to Mudlark are even better, if only for the crucial chunk of information “For four of the tunes, I brought my own geese along.” You wouldn’t get that on a fucking Mumford & Sons album.

4 thoughts on “Some Stuff I’ve Been Listening To Recently (September, 2015)”