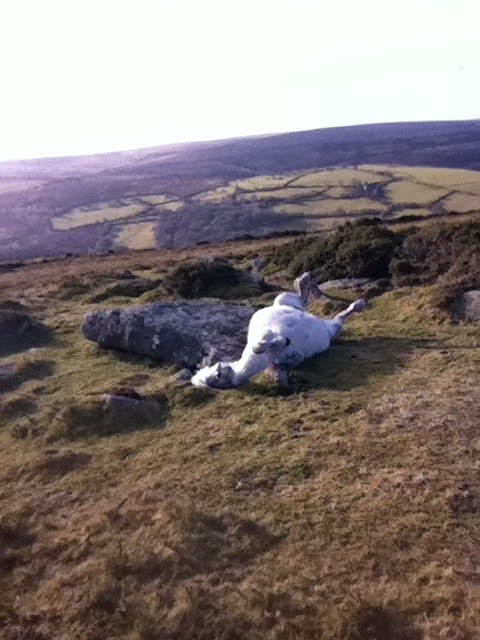 I was walking on Dartmoor today and noticed a pony roll over on his back, about forty yards from the path I was on, above Dartmeet, not far from Yar Tor. “Hello!” I said to him, in the fake posh voice I always use when speaking to ponies and horses. I assumed he was just rolling in the sunlight for fun, but noticed him kick his legs a few times, so went over and took a closer look. He seemed very still, and, as I got nearer to him, his legs stayed in the air, and he still didn’t move. I watched for a few minutes longer and got close to him but he didn’t seem at all affected by my presence. He kicked his legs again one more time, but stayed in the same position, breathing heavily, and I started to worry about him. Fortunately, I was in one of the few spots on Dartmoor where my phone gets reception and – with not a lot of help from 118, who initially put me through to the Dartmoor National Park fax number – managed to get in touch with a lady called Karla, who works for Dartmoor Livestock Protection. Karla thought, due to the position of the pony’s legs, it sounded like he might be ill or in trouble. I gave her the map reference and she sent a local farmer out to check on the pony.
I had to rush home by this point but I asked Karla to let me know if the pony was okay. When I was back in an area with more phone reception, I forwarded a photo I’d taken of the pony. Not long afterwards Karla called to tell me that a farmer had been out and discovered something I’d not suspected, even from a few feet away: the pony had in fact got its back trapped between two rocks. The farmer had helped him up, and he was now back upright again, helpfully chewing on the heather* with some of his friends.
I wondered if I should have noticed the pony’s exact predicament, but it was hard to see that he was trapped: it’s not exactly clear, even from my cameraphone shot. “Perhaps I should have been braver, and given the pony a nudge?” I asked myself, but I think, being far from an expert in equine matters, I probably did the right thing. I’ve been thinking a lot recently about how lovely the ponies on Dartmoor are – even the one who chewed off part of my car’s steering wheel in 2002 – and wishing drivers would take better care, and keep them in mind, when driving across the moor, so it was especially nice to do one of them a little favour.

*Good fact I learned recently: because ponies do this, Dartmoor has more butterflies.