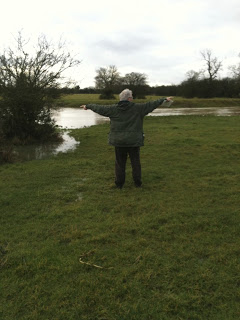 There had been quite a bit of speculation amongst my dad’s mates at swimming concerning when his black toenail would fall off. Looking at how precariously it was hanging there on their last swim before Christmas, his friends Pat and Malcolm suggested that today could be the big day. “What if it comes off in the water?” asked Pat. “That wouldn’t be be good.”

“NO, IT WOULDN’T,” replied my dad. “ESPECIALLY IF SOMEONE IS DOING BREASTROKE AND HAPPENS TO BE OPENING THEIR MOUTH JUST AS IT FLOATS INTO THEIR PATH.”
The nail, however, had been looking just as precarious for several weeks. I’d been getting little reports about it by text message from my mum. “Your dad’s black toenail is looking really bad now: I think it is about to come off,” she would tell me, but several days later, there it would still be. My dad knew it would hold on for a bit longer still. He loves his early morning swims and would, I am sure, be reluctant to jeopardise his relationship with the authorities at the pool by defiling the water. Recently, the pool asked its regulars if they had any suggestions for things they’d like to change about the facilities. My dad came up with the following three:
1. A trompe-l’œil panoramic landscape on the bottom of the pool to keep people amused when they were swimming with their head down.
2. Mirrors on the ceiling, to enable swimmers doing backstroke to see where they were going and not crash into each other.
3. All-over-body airblade dryers for the changing rooms.

So far, there had been no response from the pool.
I normally go to my parents’ house, which is close to the Nottinghamshire-Lincolnshire border, for Christmas, but because I was nursing a poorly cat who’d just come back from the vet after two big lifesaving operations, this time my parents drove down to see me in south Devon. My dad had filled the car with several bags of firewood, which he’d very kindly collected for me from the countryside near their house. I felt bad taking this away from him, as he stacks it in such beautiful formations in their garden, and I felt even more bad when my mum explained the length he’d gone to in order to get some of it. “He lost a big branch in the river again, like last year,” she told me. “He walked back across the field and asked me to come over and hold his legs for him while he reached over and got it. I’m 65.” Only just over a month had passed since the last large body of natural water my dad had fallen into: a small lake in Lincolnshire into which he was dipping a jar in order to find goodies for his new garden wildlife pond. 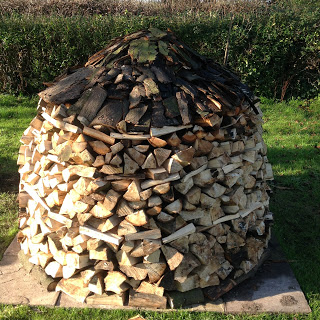 “I should have known he would never be a proper grown-up when he asked me to go sledging on our first date,” said my mum.
After my parents arrived, and my dad and I had brought the logs in from the car, he went upstairs for a bath, taking the radio with him, and my mum and I attempted to catch up with each other over the booming sound of The News Quiz and my dad’s laughter. Half an hour later, I went upstairs to the toilet and found a trail of bubbles leading across the landing to the spare bedroom. The water had drained almost totally yet the bubbles inside the bath still rose above its porcelain sides. The scene reminded me of the ever-expanding instant pudding that Woody Allen attempts to suppress in his 1973 film, Sleeper.
“WATCH MY TOENAIL!” my dad shouted, charging past me and down the stairs, barefooted. A few moments later he could be heard making loud quacking noises at my cats while throwing huge rolls of greasy cooked turkey at them: a treat he’d bought them from Asda the previous day. Afterwards, as he arrived in the living room, I noticed he’d taken his shirt off again. He had the slight appearance of a man who’d been unexpectedly invited to a wrestling match in the last three minutes.

“OH, RIGHT,” said my dad.
We looked through the window at the gardens, with their hibiscus, azaleas, fountains and towering flagpole-thick bamboo, down towards the fearsome bright blue mouth of the Atlantic.
“WE COULD FIND OUR OWN COMBE AND HAVE ALL OF THIS,” said my dad to my mum.
“Yeah, but you’d have to make a shitload of money from hotels first,” I said.
“OR FROM SELLING DRUGS TO CHILDREN,” said my dad.
We moved downstairs to the kitchens and staff quarters, where, spotting a mangle, my parents recalled the old-fashioned concept of Wash Day, and just what a difference washing machines had made to their lives when they’d got their first ones in the late 1960s. All Coleton Fishacre’s early-mid Twentieth Century history felt suddenly very recent to me: roughly the same amount of time away from my birth as we were now. As we passed the old-fashioned mincer, my dad remembered the mincer in his mum and dad’s council house in Nottinghamshire. “MY MUM COULDN’T AFFORD ONE OF HER OWN SO SHE CLUBBED TOGETHER WITH MRS BERESFORD NEXTDOOR AND BOUGHT A SHARED ONE,” he said. “MRS BERESFORD ALWAYS USED TO HOG IT, THOUGH.”

Walking back along the corridor, we passed the man who had told my dad off for sitting in the art deco armchair. “ON A POWER TRIP, THAT BLOKE IS,” my dad said, turning conspiratorially to me. As my mum and I explored the remainder of the house, my dad ventured out into the gardens to find a patch of grass on which to lie in a starfish position with his eyes closed. Lying in a starfish position with his eyes closed is one of my dad’s rituals on days out and I’m very accustomed to it by now but it can sometimes be troubling to those who don’t know him. This summer my uncle Chris and auntie Mal told me about a trip they’d been on with my mum and dad to the Yorkshire Sculpture Park, during which some Japanese tourists found my dad lying in a starfish position with his eyes closed and prodded him to check he wasn’t dead. Perhaps he was tired, having earlier air boxed with a twelve foot stall statue made by the sculptor Tom Price. My mum took a photo of this, on my dad’s request, so it could be added to his collection of pics of him pretending to fight with other exhibits on days out, alongside such classics as the time he pretended to wrestle a stuffed hyena at Creswell Crags Visitor Centre near Worksop. 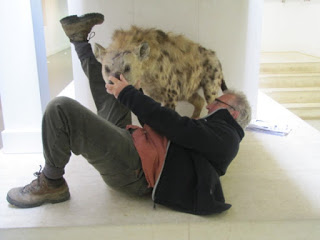 There are no exhibits or statues on the sea front at Dawlish so the potential for an incident was reduced. It was also too cold for any spontaneous starfish sleeping. The stretch of railway line that runs in front of the beach here, where Deepest Devon ends and the cliffs turn red, is the Elizabeth Taylor of train tracks: beautiful, but constantly troubled. When you’re on the train, passing along it, you feel like you’re in the sea itself. This has been a rare winter when the sea hasn’t broken the track into bits, causing lengthy closures and replacement bus services. Nonetheless, the wind was fierce today, gnashing at our cheeks as we walked west, the waves thudding angrily against the track’s new rocky defences. There were lots of other families walking the footpath but I noticed that unlike mine, the dads in those families did not periodically shout “KEEP AWAY FROM THE EDGE” as they strolled beside the steep drop to the beach.
“Have you been to get your bad tooth looked at yet?” asked my mum.
“KEEP AWAY FROM THE EDGE!” said my dad.
“Mick, stop saying ‘KEEP AWAY FROM THE EDGE!’,” said my mum. “We’re miles away from it.”
“YOU’RE NOT. LOOK AT TOM. TOM, STOP DOING THAT. YOU COULD FALL IN AND AND DIE.”
On the way home, my dad asked if I had used my new headtorch yet: a present he’d bought me for Christmas, but which he’d had delivered to me several weeks early because he was so excited about it. I admitted that I hadn’t, and apologised. “WHAT?” he said. “I CAN’T BELIEVE IT. USE YOUR HEADTORCH. AND WHAT’S THIS YOUR MUM TOLD ME ABOUT YOU TURNING DOWN THE CHANCE TO GO ON BREAKFAST TELLY?” I told him that I had no interest in ever being on telly, detailing another couple of opportunities I’d turned down in the last six months. “I CAN’T BELIEVE YOU. YOU’RE UNFOOOKINGBELIEVABLE. YOU’LL BE BACK WORKING IN TESCO IF YOU’RE NOT CAREFUL.”
When we arrived home, I put rolling news on the telly for my dad and helped my mum prepare dinner. The three of us ate this in the living room, and my mum and I talked about some rabbit screenprints she’d been experimenting with. My dad wanted to watch the Netflix drug drama Narcos, which I’d been enjoying lately, but I said it was probably best not to, since my mum found it too violent and, due to the subtitles and the extra concentration they require, it’s not the most sociable viewing. Instead we watched the 1975 Dad’s Army Christmas Special, which my dad guffawed at, and I enjoyed too. The night passed quietly, in contrast to the previous time my parents had stayed when, in his sleep at 3am, my dad had shouted “THEY LET ME OUT SOMETIMES YOU KNOW.” The next morning, my dad got up early, threw some more cooked meat at the cats, and packed the car, ready for the long journey back to Nottinghamshire. My mum checked my dad had not erroneously put any of my possessions in their suitcase, such as the four clean pillowcases he took from me last year. I felt much as I always do when I’ve seen my parents: tired, ready for quiet sit down, but sad to see them go, and wishing I saw them more frequently. “WOFFAL!” said my dad, his shortened version of “WATCH OUT FOR FOOKWITS AND LOONIES!”, which is his catchphrase, and which he has told me every day I’ve spoken to him for as far back as I can remember. WEAR THAT HEADTORCH!” he added, as he and my mum walked to the car. I promised I would, and tried to remember where I’d put it. I asked him if his black toenail had fallen off yet and he said it hadn’t. 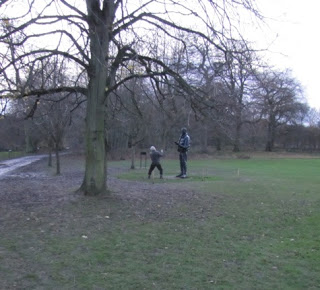 Read more about my dad in my book 21st Century Yokel.

30 thoughts on “Two Days With My Dad”