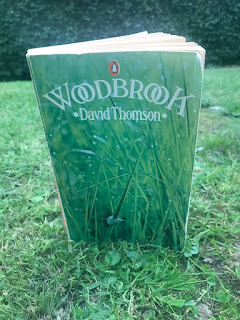 I’d not read Woodbrook before I wrote my new book and they’re very very different works in many ways but I relate to its intentions in that it is, like mine, a not-quite nature book, a not-quite social history book, a not-quite memoir: something concerned with small stuff, but that gets quite big, because it doesn’t want to settle for being one thing at once. It concerns the decade Thomson spent in Ireland in the 1930s as a tutor to two adolescent siblings, one of whom – the horse-loving Phoebe, who spends night times afraid of getting bats tangled in her hair – soon becomes the subject of his platonic adoration. He manages to give us an intimate and convincing portrait of himself as a sensitive, myopic young man, thrust into the eccentric ways of a rural place frozen somewhat in time, but what’s really impressive is the way he interweaves this minor (but at times very painful) personal history with both Irish history as a whole and the folklore of a small patch of land. I gained a much better understanding of the far deeper roots of the problems Ireland has had in the last century from reading this book, and was truly unsettled, in a manner that I sense will stay with me for some time, by some of the eerier, liminal tales about the tyrannical landlords of County Leitrim: the one who would allegedly “shoot every goat he saw”, for example, or the bush that sprang up on the site of a girl who was tied to galloping horses by the plaits in her hair and torn in two. Woodbrook is a little forgotten now – as, in a development of major injustice, has been Thomson, who made radio shows about oral history, and wrote children’s books, novels, and other, equally affecting citizen folklore memoirs about Scotland and 1950s Camden town, plus an unforgettable book about hares with another folklorist hero of mine, George Ewart Evans – but those who love it tend to really love it, and often make pilgrimages to the house from which it takes its name, near Carrick-on-Shannon. It’s not surprising: Thomson turns the place into a character in its own right, and his injured eyes have a habit of wandering exquisitely to the edge of the frame, preferring detail over drama. A local postman sounds a long bugle at his arrival so residents can come to meet him partway and save his aching legs. Nearby railway stations have hens walking up and down the platforms. A crow lives on a towel horse in the bathroom for a number of weeks. When Thomson cleans the building’s chimney, he uses a blackthorn bush he has cut down a few minutes before by hand. The method seems pretty archaic, until he finds out that, before that technique became the norm, they used a live goose instead, whose flapping wings would clear the soot. 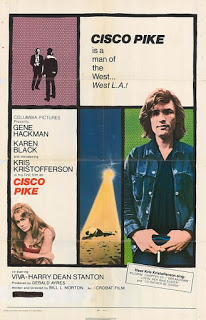 Remember music in 2012? It wasn’t all that different different to music in 2017, really, was it? But in the 1971 of Cisco Pike, the music of 1966 is a lifetime away. “66. You wouldn’t have believed it, Lynn,” says Merna, one of the girls Kris Kristofferson and Harry Dean Stanton have picked up of an evening, to her younger friend. “Things were really insane then.” Since then, things have gone bad for Kristofferson’s character, Cisco Pike, and his former bandmate, Jesse (played by Stanton); they’ve lost their record deal, and the former is now caught up in a deal selling drugs for a corrupt cop, played by Gene Hackman, who appears to sleep through the entire film. Of course, in real life Kristofferson was already in his 30s by 1966, and had already landed a helicopter in Johnny Cash’s garden in order to persuade him to listen to his songs, although you wouldn’t know it here. His not-yet bearded face, like his acting, has an awkward petulance to it, suggesting he learned a lot in the fifteen months between this and his excellent performance as the cooler of the two leads in Sam Peckinpah’s Pat Garrett and Billy The Kid. The story is without layers, a piece of wood with no grain, but the dialogue is so hippie non-sequitur ridiculous to frequently veer towards the surreally entertaining. At one point, provoked by very little, Kristofferson smashes up the office of a David Geffenlike manager. “Is today the eighth?” he asks him, immediately afterwards, echoing the many bad boy rock stars who have immediately turned their thoughts to calendar-related issues after trashing rooms not belonging to them. There’s also an enchantingly shabby split level apartment, with an inexplicable bit of taxidermy on the wall. In all honesty, I watch something like this for the hair, the soundtrack, the ambience, the unintentionally hilarious dialogue and the sunken rooms. But then afterwards I watch The Parallax View or The French Connection and remember what a real film from the early 1970s is. 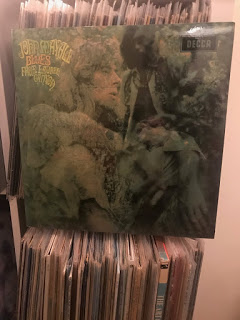 I briefly lost my mint original first pressing gatefold of John Mayall’s Blues From Laurel Canyon LP the other day and got very worried about my mint original first pressing gatefold of John Mayall’s Blues From Laurel Canyon LP, but it turned out that everything was ok: my mint original first pressing gatefold of John Mayall’s Blues From Laurel Canyon LP had merely been pushed behind my other records, as a result of overcrowding. I didn’t want to get my mint original first pressing gatefold of John Mayall’s Blues From Laurel Canyon LP fatally wet. I’m often outside, in the sun, when I’m listening to Blues From Laurel Canyon, as it’s that kind of record – I will sentimentally admit that its song ‘The Bear’, with its central refrain of “the sun is shining down and The Bear is rolling in the shade”, was the soundtrack of my final summer with my elderly cat of the same name last year – and I will sometimes take Blues From Laurel Canyon’s sleeve out with me to fondle and gaze adoringly at a little bit, as it’s that kind of sleeve: swirly and green and psychedelic on the outside, pleasingly thorough on the inside, offering you its lyrics, the story of its creation, and some photos of its long-haired, strong-chinned mastermind in the Canyon itself, making fire, in a tasselled waistcoat, like some dandified version of Palaeolithic man. But John Mayall isn’t psychedelic, is he? That’s certainly what I thought before I heard this album. I have a fairly strong resistance to the blues, as played in their most straightforward form, and that’s kind of what I’d assumed Mayall was, but this record is anything but straightforward. It starts with a roaring jet plane noise, in ‘Vacation’, which makes you feel like your turntable is going to take off vertically and not stop until it leaves the earth’s atmosphere. It then swaggers – with the help of tabla drums and the guitar of future Rolling Stone Mick Taylor – about through late 60s LA and its ragged, rugged edges, predicts Spiritualized’s entire career in the opening twenty instrumental seconds of ‘2401’, then takes the tempo down and finds a softness – aided by Fleetwood Mac’s Peter Green – in ‘First Time Alone’ that almost feels too soft to have actually been physically recorded, even softer than the most beautifully soft moments of Green’s Then Play On masterpiece two years later. It’s a concept album: the story of Mayall’s three month, relocation-inspiring break on the US west coast, after the break up of his Bluesbreakers, and each track flows into the next seamlessly, without pause, touchable, textured, loud, quiet, wild, sexual, tender, restrained. In short: it is one of the most far out, ambitious, fearless records of a hugely far-out, fearless, ambitious period, and takes you to the landscape of its central inspiration like only a few very special records (I’m thinking Exile On Main Street and the basement of Villa Nellcote here) do. I can hear the excitement of an America long gone in these cosmic, conceptual almost-blues, and it’s anything but the one the country’s absurd and hateful current President tries to evoke, and I want to be there, so, so much.

My new book 21st Century Yokel is published this autumn. Pre-order a deluxe hardback from Unbound or the trade hardback from Amazon.
I don’t work for any national media publications any more so all my writing now appears on this site or in my book. The site is free, but if you enjoy the writing on here you can take out a small voluntary monthly subscription.