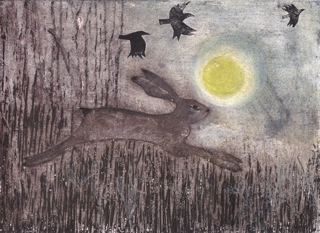 From April, for about three months, the British countryside dresses very smartly but around the end of July it unbuckles and gradually eases its belt back through the loops of its trousers. Then come August and early September, at which point it abandons any pretence of formality and stops tucking in all together. Vegetation takes on an unhinged look and the crepuscular and nocturnal noises near where I live get messier, as if attempting to mimic the foliage: the owls on the periphery of my garden have become louder; a small fox has been at large, slaughtering prey of not dissimilar bodyweight to its own, then dragging it effortfully down the path to my gate; a new hungover-sounding sheep has moved into the field nextdoor and is far from stoical about its tribulations. A dead hare appeared in the centre of my lawn a few weeks ago: perfectly intact but stringy, blackened by rain, primal-looking. Dropping off to sleep, I have heard sardonic growls and low grumbles beneath my bedroom window marginally suggestive of badgers, but I haven’t seen a badger here since last September, when the cull first came to this region and efficiently did its barbaric, scientifically unsubstantiated business.
As I climbed the westernmost of The Blackdown Hills last weekend to the Wellington Monument, fifty miles north east of my house, in rain heavy enough to drown out any similarly feral end-of-summer sounds, tired green overlapped tired green on the edge of the footpath as if in the last exhausted round of a fight that had gone on too long. But when I stepped into the humid woodland directly beneath the monument, something a little miraculous happened: autumn began. The first rust of fallen leaves speckled the path and steam filled the air: steam so steamy it looked like joke steam, steam you could take a bite out of. It even showed up on the photo I took. “I don’t buy it,” said my neighbour, Nomi, upon seeing it. “You have a portable smoke machine, right?” 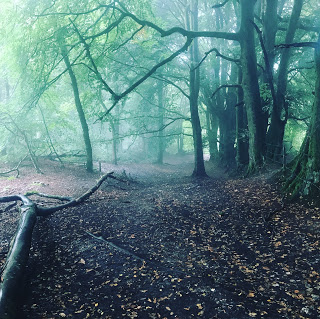 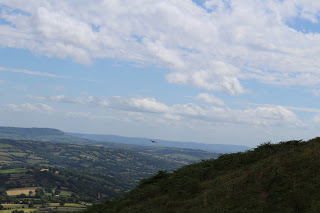 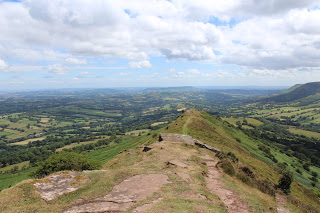 Here’s a little-known tip if you want to give your music an edge: sing about a witch, or add some flute to your songs. All songs that feature flute or lyrics about witches are a little bit better than songs that don’t. If you don’t have a flute to hand and you’re not into witches (why? Is there something wrong with you?), try singing about a mountain or hill instead. The mere idea of mountains and hills seems to elevate a song to a more enlightened and otherworldly artistic place. ‘Our Mother The Mountain’ is Townes Van Zandt’s most haunting, transcendental song and it is possible nobody has ever sounded more possessed with an acoustic guitar in their hands. Every track on the 1970 Trees album ‘On The Shore’ is wonderful but the best is ‘Murdoch’, with its evocation of a high altitude “barren land of beauty” overflown by “black-beaked crows”. Also on the playlist was Traffic’s version of ‘John Barleycorn’ which, though not specifically about a mountain or hill, is perfect for a haunting landscape with a hint of hard life and soggy death. Jim Capaldi of Traffic once lived in a farmhouse on The Black Mountains, until he left and, according to Haydn from Haystacks, the place was turned into a wreck by squatters. On the cover of Capaldi’s brilliant but poorly-titled 1974 solo album ‘Whale Meat Again’ Capaldi posed with a local farming family and, the harder you look at expressions on their faces, the more vividly imaginable the conversation that led to the photo shoot becomes.
Farming family: “Us? Why?”
Jim: “Come on. It will be cool. You can pretend to be me band.”
Farming family: “Okay, if you say so. But how long will it take? There’s a ewe gone lame in the back field.”
My playlist ended with ‘The Hills Of Greenmore’, arguably the most unforgettable of the songs by the superior, mark one version of Steeleye Span: the ultimate hare song, in that it, like its subject, is magic, elusive, mysterious, ambiguous. I probably shouldn’t listen to ‘The Hills Of Greenmore’ any more. Firstly, you could argue that I’m being superfluous in doing so, as it’s been lodged deep inside me since the first time I heard it. Secondly, it is guaranteed to reduce me to rubble every time: the particular combination of cruelty, beautiful imagery, soaring yet elegiac melody, the narrator’s contradictory affection for the hare – or as he calls it, the “sweet puss” – the hare’s final speech as it dies, announcing what freedom Old McMahon and his cronies, and their “pack of strange dogs”, have taken away from it. Is it wrong that I felt more broken after hearing it than I was after finding the dead hare on my lawn, a fortnight later? I don’t think so. I don’t think that’s a reflection of me being divorced from my immediate surroundings and living too deeply through song. I think it’s a reflection of the magic of Steeleye Span at this bold, experimental point in their career, some hard-felt centuries-old verse, and the fact that this hare, here in Devon, had clearly died of natural causes, and not been persecuted by heartless, bloodthirsty sportsmen. But where had my hare come from? When I lived in the flatlands of the east, I regularly saw hares. In spring, I peeked over hedges and saw pairs boxing one another. Later in the year, on walks where I’d misplanned and stretched the daylight, I disturbed them in their furrows, watching them scatter and zigzag ahead of me. But in Devon I’d seen only two: one living and one that had been dragged into the garden a couple of years ago, dead, by my cat Shipley – though, as an animal capable of running at forty miles an hour, clearly not caught by him in a healthy state. This was not a harey area. I’d have been far more likely to see one on my walks in Herefordshire or Somerset, where there are bigger spaces between the hills: puss-friendly plains. But hares are not exclusively lowland creatures. One of the folklore nicknames for them is, after all, Ring The Hill. I like this name, but hares have an unusually large amount of inventive folklore nicknames, and I don’t think it’s quite my favourite. At the moment I’m split between Old Fat Bum, Dewflirt, Stag Of The Stubble and The One Who Does Not Go Straight Home. The latter is supposedly a reference to that mazing, indirect run hares are prone to but it’s perhaps deliberately suggestive of something else: a secret after-dark activity. Their extra business. 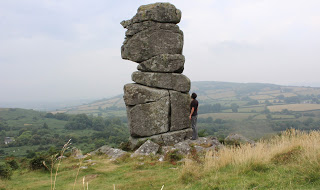 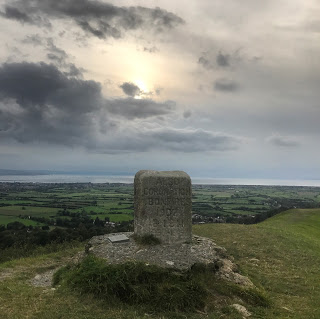 Hare collagraph by my mum. Lots of her artwork is available to buy on the Graffeg Books website.

8 thoughts on “Ring The Hill”