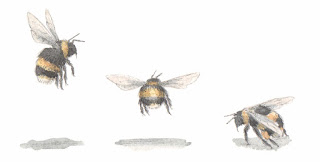 “Bees?” said the lady near the door as I entered Exeter’s Royal Albert Memorial Museum. “I read non-verbals very well,” she added. I’d guess only about five percent of the foot traffic through the museum’s doors this Saturday morning was for the bee identification course in one of the museum’s upstairs meeting rooms, but perhaps I just had a bee look about me. It wouldn’t be surprising, as I’ve been thinking about bees a lot recently, ever since a few months ago when a stranger came up to me and said “Excuse me. Did you know two bees are having sex on your flares?” and I look down at my flares and saw that two bees were having sex on them.

It’s not uncommon for insects to have it off on me. Just last week, two flying ants went at it quite hard doggy style on my hand as I sat in the garden trying to concentrate on an intricate American novel about a century of family life. But I felt particularly honoured to function as a bee knocking shop. I have always loved bees, and it’s a love that’s burned more brightly since I moved to Devon, where there appear to be as many bees as there were in the Nottinghamshire and Derbyshire countryside of my childhood. Sometimes, one of them will fly into my front room, headbutt a load of furniture and leave. I would not put up with that kind of behaviour from a human friend, but from a bee it feels like a compliment. I would probably even go so far as to say that I’d fight anyone who thinks bees aren’t great, were it not for the fact that loving, not fighting, is the bee way.

There was a time when my friends would have been surprised if I told them I was doing a day course identifying bees. Actually, that’s not true. There wasn’t. This course at the Royal Albert Museum was taught by Stephen Carroll. Stephen is the County Recorder For Hymenoptera, which essentially means he is in charge of all the insects in Devon. When insects are obscure and aren’t sure what they are, they can go to Stephen to find out. As well as showing us how to identify more regular bumblebees, such as the common carder and the buff-tailed bumblebee, he told us about bumblebees particular to Devon, such as muscorum and humilis. I decided that of all of these the buff-tailed bumblebee was my favourite, having a certain satisfying chunkiness about it. I imagined myself befriending one and teaching it to sit on my shoulder, like a fat stripy parrot.
Later, we also learned about some other bees who hang out in other parts of the country, but don’t make it this far south west. At this point, I found myself bristling, and getting a little Devon-proud. “Why did Northamptonshire have red-shanked bees, but not us? What was so good about Northamptonshire?” I wondered. “Surely it wouldn’t hurt to nip up there in a van and bring a few back?” Finally, we traipsed out into Northernhay Gardens with perspex bee pots, gently trapped some bees inside them, identified the bees with Stephen’s help then set them free. It was amazing how many bees you saw, even here, in the heart of a small city, once you truly opened your eyes. A couple of homeless men who had been sleeping under some blankets in the Gardens also joined in at one point and seemed equally fascinated. 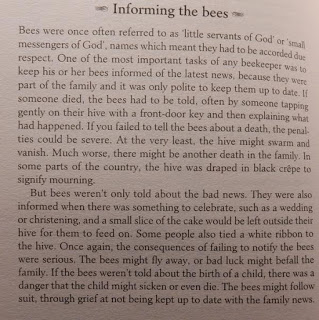 In the days immediately after the course, I saw bees everywhere I went, felt aware of them as never before, doing their stuff in the walls of green beside Devon’s roads. In my local lido, I rescued so many bees from the water that it severely cut into my swimming time. Walking through the grounds of Dartington Hall a couple of weeks later, I noticed a wild honey bee sanctuary had been set up just to the rear of St Mary’s, an eery half-demolished church dating from the 1300s, with what could be Devon’s most folk horror film-ready graveyard. It seemed an apt spot for bees, who are so often associated with human death and birth, and so crucial to our continuing prosperity as a species. Earlier this year I read about the ancient tradition of “informing the bees” in Jane Struthers’ excellent book of lost country wisdom, Red Sky At Night (see above). It is not surprising that, historically, we feel the need to tell bees important things. If any flying insects are good listeners you sense it’s got to be bees. They seem in that bit less of a hurry, more meditative than their peers. As I read on, I imagined telling them the big stuff in my life and finding them a receptive audience.
“Hello. Is that the bees?”
“Yes.”
“I am having a big party for my fortieth birthday in May.”
“Great. Thanks for letting us know. Remember: it’s better to overestimate on food than to underestimate.” 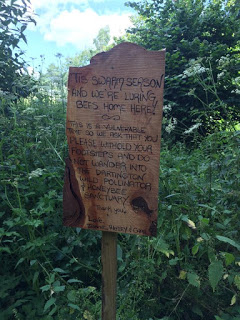 Last Friday I met up with the three friends responsible for keeping the sanctuary, Cami, Jamie and Hayley, and they told me about the new, smaller kind of naturalistic hives they had built for it in the workshop next to the farmhouse they share, their sadness at losing this year’s swarm and their hopes for next year. “People think of bees as individuals, but it’s important to see the swarm almost as a person in itself, then we can understand them better,” Jamie explained. Cami and Jamie are the honey bee experts of the group, but Hayley seemed delighted to get proper chance to enthuse about bumblebees for once. I learned from her, for instance, that bumblebees very rarely suffer from premature ejaculation.
I told Hayley about the two bees who banged each other on my flares. “That happens quite a lot,” she said. I wasn’t sure if she meant on flares, or just generally. “I watched two of them going at it for ages recently. They will often last an hour. The guy wiped himself off afterwards.” I went home and there was not a bee in sight in my garden. Instead, the area around my wooden patio furniture was overwhelmed by wasps. It was September now: the time when they took over and spread their bad vibes. Unlike one of these wasps, you wouldn’t find a bee loitering around a bottle bank, being a twat. They would always be the Tom Cruises to bees’ John Cusacks, but I tried not to feel too negatively towards them. They build some amazing structures and, as I learned from Jules Howard’s recent article here, they have other plus points. Jules was once stung several times on the testicles by wasps and, if he can still feel kindly towards them after that, it says a lot. Perhaps not as dramatically, but still in a way that felt more than dramatic enough at the time, a wasp once stung me inside a large wound on my arm that I’d sustained from falling through a window the week before. I still am not certain I have ever experienced pain quite like it – the time I mistakenly mowed a wasps nest and was stung four times on the bottom three years ago didn’t even come close – but it was over three decades ago now and I’m slowly learning to forgive. You can’t imagine bees doing that sort of thing, though. They’re the good guys, working tirelessly on our behalf, and prepared to die for what they believe in. 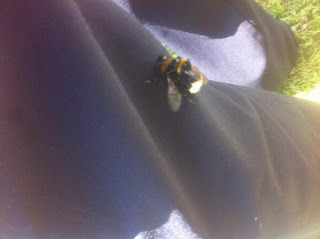 Sign the petition to ban the use of bee-harming pesticides.
Pre-order my new book.